A U.S. woman's visit to British Columbia's capital city has been making waves on the internet.

The video was uploaded to TikTok on Monday, and has garnered more than 6 million views and tens of thousands of comments in about 24 hours.

Subtitles also indicate another polite aspect of the post; drivers can be heard happily responding with cheerful goodbyes.

Carlson was visiting Victoria with her partner, who is originally from the West Coast city.

"I had just fallen in love with the way that Canadian buses, or at least in Victoria, say, 'Sorry not in service,' which is something that I just hadn't seen before," she told CTV News from Minneapolis, Min.

"I used to live in New York City and I can tell you their buses never apologized for not being in service," she said. 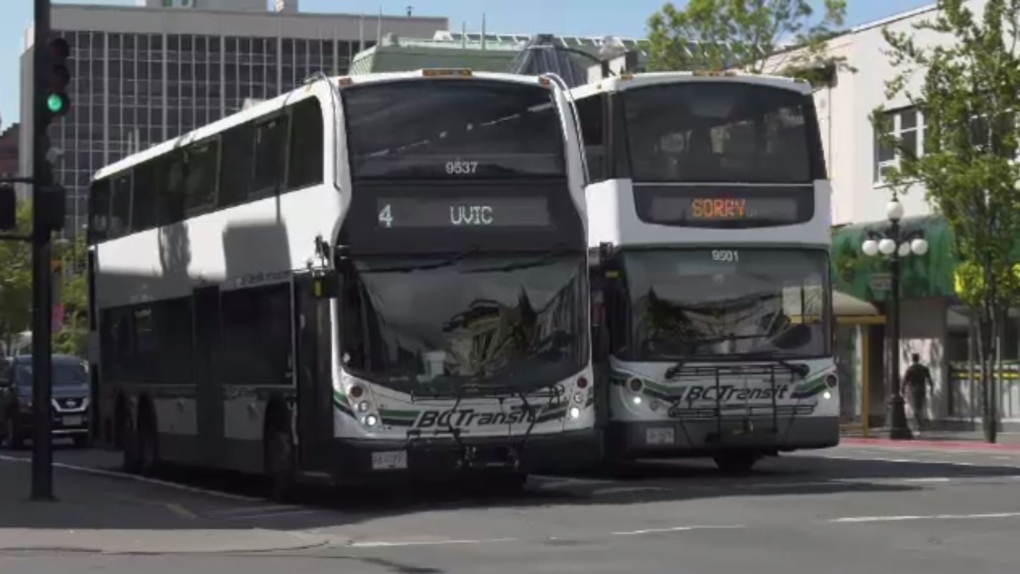 BC Transit buses are pictured in downtown Victoria. (CTV News)

Carlson shared her appreciation about the "not in service" signs with her partner's friends, who told her to wait until she was on the bus and heard how people thanked the driver.

"So I went onto the bus prepared for this and I just found it incredibly endearing," she said.

"There was so much joy, certainly, but I tried not to be creepy about it. I didn't want to start giggling on the bus while people said 'Thank you,'" she explained.

Carlson says she was also happy to see that passengers from a range of different ages and backgrounds all thanked the bus drivers in Victoria.

"You can see the oldest person is probably in his late 60s, and you can hear from the youngest person that she was probably about five," she said.

The province's transit operator has been watching the video catch fire online.

"The relationship our drivers have with our customers is really important to them, and that greeting when people get on the bus, and the 'thank you' when they depart, is greatly appreciated," said Jamie Weiss, senior media relations advisor for BC Transit.

"We realize this isn’t something that happens everywhere, and BC Transit wants to say thank you to all our customers who keep this important tradition going," he said.

Carlson is a travel and food blogger, as well as a content creator, and she says this video is her most popular yet.

"Whenever I do have a video that goes 'viral,' when you look at the comments just like in this video it's people saying, 'That's how I do it in my home.' Or, 'That's not how I do it in my country.' And people really enjoy getting to see how things are different or similar all around the world," she said.

Carlson says comments from across the globe seem to indicate that other residents also thank their bus drivers, including commenters from Australia, Hawaii, New Zealand, South Africa, and from "around Europe."

Even some Americans have said it's normal for passengers to thank their bus drivers in their community.

"It's just because I lived in New York and no one did it there," said Carlson.

At the same time, she notes that some Canadians have said "we definitely don't do this [over here]."

"As an American I just have this stigma, 'All Canadians are nice,' right? And so I see something that affirms that, I post a video about that," she said. "But I understand Canada is huge and it has many different regions, just like the U.S."

The big day is here: Quebecers head to the polls

Quebecers are casting their votes Monday after a five-week election campaign.

Indonesian police said they were investigating over a dozen officers responsible for firing tear gas that set off a crush that killed 125 people at a soccer match, as families and friends grieved Monday for the victims that included 17 children.

Nobel win for Swede who unlocked secrets of Neanderthal DNA

Swedish scientist Svante Paabo won the Nobel Prize in medicine Monday for his discoveries on human evolution that provided key insights into our immune system and what makes us unique compared with our extinct cousins, the award's panel said.

Hurricane Orlene is poised to strike Mexico Monday, bringing heavy rain and the potential for severe flooding to popular resort areas along the west coast.

An alliance of sex worker rights groups is in Ontario Superior Court today asking for several sections of the Criminal Code to be deemed unconstitutional.