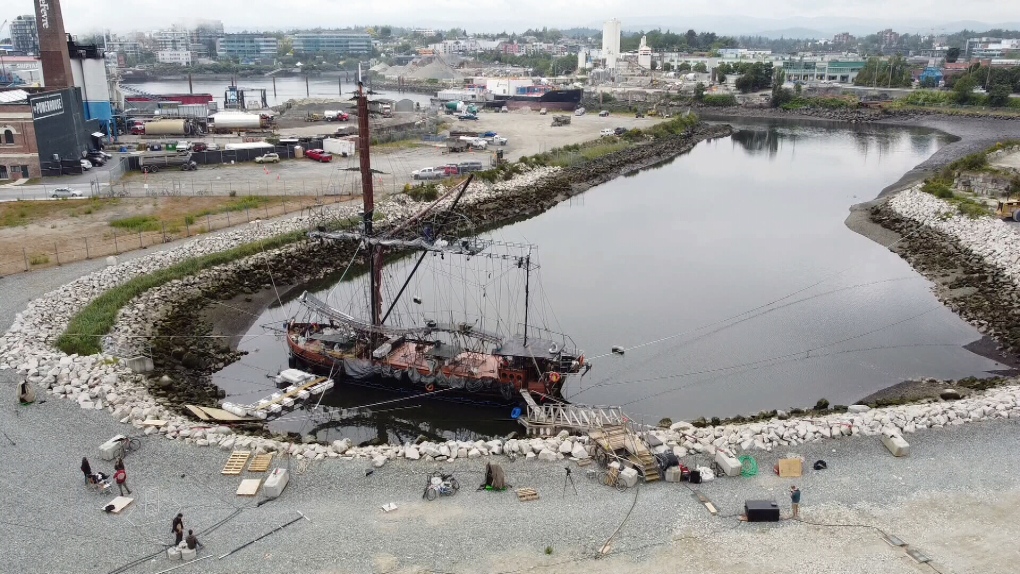 The Caravan Stage Company has docked its tall ship, the Amara Zee, in Rock Bay, ahead of its world premiere of a production called Virtual Rogues.

A group of travelling performers is preparing to dazzle crowds with a high-flying spectacle from a makeshift stage aboard a pirate ship.

The Caravan Stage Company has docked its tall ship, the Amara Zee, in Rock Bay, ahead of its world premiere of a production called Virtual Rogues.

The performance focuses on the ethos and ethics of the digital future, and is described as "experimental cirque opera."

"To be able to witness cirque artists swinging from ship rigging and big puppets and enormous digital characters strewing from zip lines ... To see a company like this in your back yard is a pretty special encounter," said crew member Doria Bramante.

The Caravan Stage Company was founded by Paul Kirby and Adriana Kelder in the 1970s on Vancouver Island.

"With canvas-covered wagons and horse-drawn carriages, and they would go town to town producing theatre," said Bramante. "In the '90s, they built the tall ship, the Amara Zee."

The company performs internationally, and the Amara Zee has sailed "all but one of the seven seas," according to the group’s website. It's also the world’s only tall ship theatre.

Virtual Rogues will be the last tour for the group's founders. Previews of the show run from June 23 to 26, with the official opening scheduled for the following week and shows on June 28 and 29, July 2 and 3 and July 5 through 10.

The performances begin after dark, at 10 p.m. each night.

Admission is pay what you can, at the gate, located at the north end of Store Street.