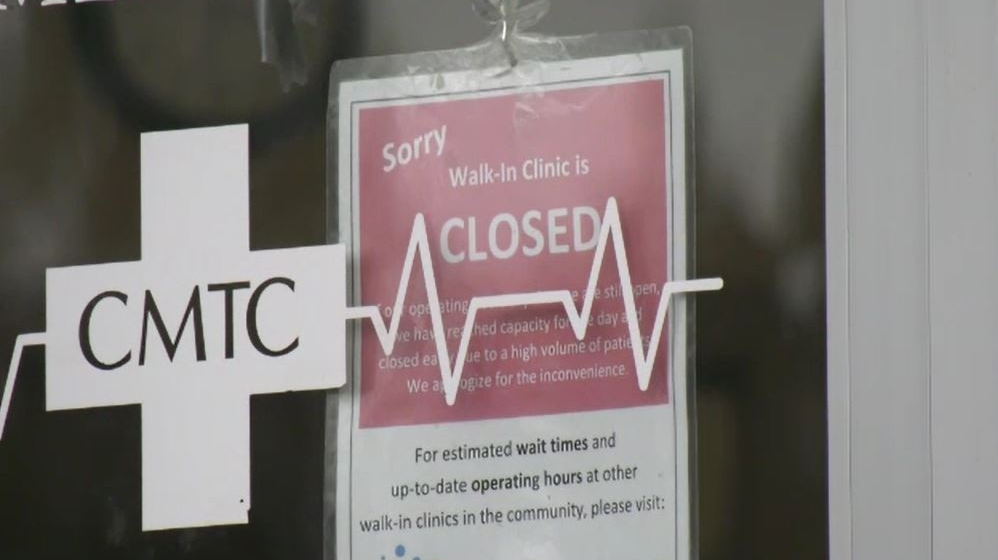 A clinic in Langford, B.C., is pictured. (CTV News)

An online petition calling on the provincial government to take action on B.C.'s doctor shortage has been signed more than 17,000 times as of Monday.

The petition was launched at the end of January in response to numerous medical clinic closures across the province, including on Vancouver Island.

It also calls for an immediate response and action plan from the provincial government to address the shortage.

"It has several recommendations within it, primarily addressing the issue of the Physician Master Agreement and the pay schedule that family physicians receive," said Camille Currie, who spearheaded the petition.

Currie has two children and a husband who have a disease-causing mutation that's not currently identified in any other living person in the world, and they recently lost their family doctor.

Currie says the shortage of doctors is a crisis and is putting the wellbeing of families and the province at risk.

The petition also claims 40 per cent of family doctors are over the age of 55, and within five to 10 years most of them will retire, which will only increase the doctor shortage and the feeling of abandonment for those left without consistent medical care.

"It’s really important to address the issue of people feeling abandoned in this province because we’re seeing localized solutions being presented by the government and what we want to hear is solutions for the entire province," said Currie.

"This crisis is provincewide and so every citizen deserves to hear how it’s going to be addressed for them," she said.

"We are striving for the government to demonstrate to us that they are going to provide more than just platitudes and scripted responses and show us they are coming to the table with real solutions."

Cassidy Hutchinson, a key aide in Donald Trump's White House, told the House committee investigating the violent Jan. 6, 2021, insurrection on Tuesday that Trump was informed that people rallying on the mall that morning had weapons but he told officials to 'let my people in' and march to the Capitol.

Ghislaine Maxwell, the jet-setting socialite who once consorted with royals, presidents and billionaires, was sentenced to 20 years in prison Tuesday for helping the wealthy financier Jeffrey Epstein sexually abuse underage girls.

Adults over 50 who have had COVID-19 are more likely to experience a shingles outbreak, according to a study published in May.

Canada has been without an ambassador to China for 6 months. What's the holdup?

At a time of enhanced global uncertainty and growing Chinese influence, the Canadian government faces mounting pressure to appoint a diplomatic representative in Beijing after the post has sat vacant for six months.

Scotiabank is putting its Hockey Canada sponsorship on ice. The financial institution said Tuesday the pause will last until it's confident the right steps are taken to improve the culture within the sport.