Frustrated with what they say is a horrific logging road constantly speckled with potholes, residents of the Village of Tahsis grabbed shovels and buckets and started fixing it themselves Monday.

"It’s an ongoing dilemma with road repairs that we have as a community when we have to travel over this atrocious road that’s just in terrible condition," said Jack Taylor, one of a dozen people he says spent three hours filling in potholes along a logging service road linking Tahsis with Gold River on Vancouver Island.

"We actually refer to them as craters not potholes because they are getting pretty big and numerous," he said.

"There isn’t a space on the road that you can travel to get out of them and if you slow down when you’re going through them they’re actually really gut-wrenching."

Taylor reached a point of frustration after recently breaking a third spring on his Dodge Ram pick-up in five years on the road, and then complained about it on social media.

Others in the community agreed to rally to help do some repairs. 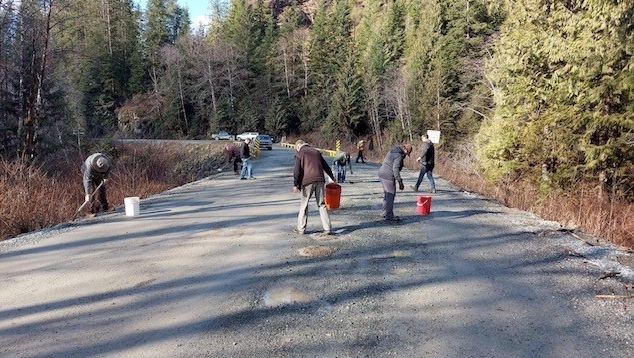 Residents concerned about potholes on a road that leads to Tahsis, B.C., took matters into their own hands and began filling them. (Jack Taylor)

"I guess it just helped us out a lot to get out there and take buckets and shovels, pick up the gravel off the side of the road and fill up a series of potholes," Taylor said.

Tahsis Mayor Martin Davis says the village has been working for quite some time to get the condition of the road improved, but nothing seems to be working.

"We’ve been waiting so long, and they’re bone-jarring, and obviously we can’t do the whole road but we decided to make a little dent on it," he said.

'THEY GET SO DEEP'

Davis says maintenance along Head Bay Road was far better when he first moved to the community 20 years ago, but it has been cut back.

"Sometimes it feels as though they’re using it as a bombing range or something, you know?" said the mayor.

"You’re coming around the corner, the road's kind of OK, and then you hit these things and all of a sudden your truck is going sideways and bouncing over the holes," he said. "It’s phenomenal how quickly they get so deep."

Davis says less than one third of the 64-kilometre stretch of Head Bay Road linking the two communities is seal coated. He says he understands it will never be fully paved, but would like to see the maintenance improved.

"At times we’ll go weeks without any grading on the road and it becomes very damaging to our vehicles as well as a hazard," he said. "I know a few people who have broken parts on their trucks. I’ve broken a spring on my truck in the past too."

The mayor says he’s been calling for "inspection reports" to see if the terms of the contract are being adhered to by Mainroad Contracting, but he says the Ministry of Transportation hasn’t been forthcoming.

"We finally, as a last resort, went to a freedom of information request to try and get the inspection reports to find out if the contract on our road is actually being followed and they wanted us to pay for that," he said.

Davis says after disputing that $1,800 expense, the ministry agreed to split the cost. But he says he finds it "pretty irksome" that the village would have to pay for information he believes the municipal government should have a right to.

He says he’d also like to see the government go back to direct maintenance of roads like this and not contract them out, believing the overall condition of the road has deteriorated

"I’m not blaming the contractor particularly, but the fact is it’s a private company and private companies make money. When the government runs it like the forest service you know they have people who are dedicated to maintaining the road," he said.

Davis says he’ll be meeting with North Island MLA Michele Babchuck on the matter Wednesday and will be talking about the maintenance of forest roads like this one in general.

CTV News has contacted the Ministry of Transportation and Infrastructure for comment and is waiting to hear back from officials.

An Ontario mayor had some harsh words for protestors who attempted to place local police officers under arrest Saturday.