Up to 180 millimetres of rain was expected to fall before noon in many areas of the island, including Greater Victoria and Nanaimo, as the province issued flood warnings and advisories near major rivers.

Environment Canada issued rainfall warnings early Monday for all areas of the island except the far north, warning that flash flooding was likely.

"This extended period of heavy rain could result in possible washouts, debris flow and pooling water," the weather service said.

"Local river levels will rise and river flows will increase as a result of the heavy rain. Heavy downpours can cause flash floods and water pooling on roads. Localized flooding in low-lying areas is possible."

Emergency services in Sooke reported localized flooding in "numerous places in and around Sooke" on Monday. Sooke Road was closed at Kangaroo Road as Veitch Creek crested its banks and washed out portions of the highway.

The Sooke fire department urged drivers to stay off the roads unless absolutely necessary. "Please do not drive through deep, standing water, and avoid any areas of fast moving water," the department said on Facebook.

Greater Victoria is on track to receive between 100 and 180 millimetres of rain, as are Duncan, Nanaimo and Nanoose Bay. 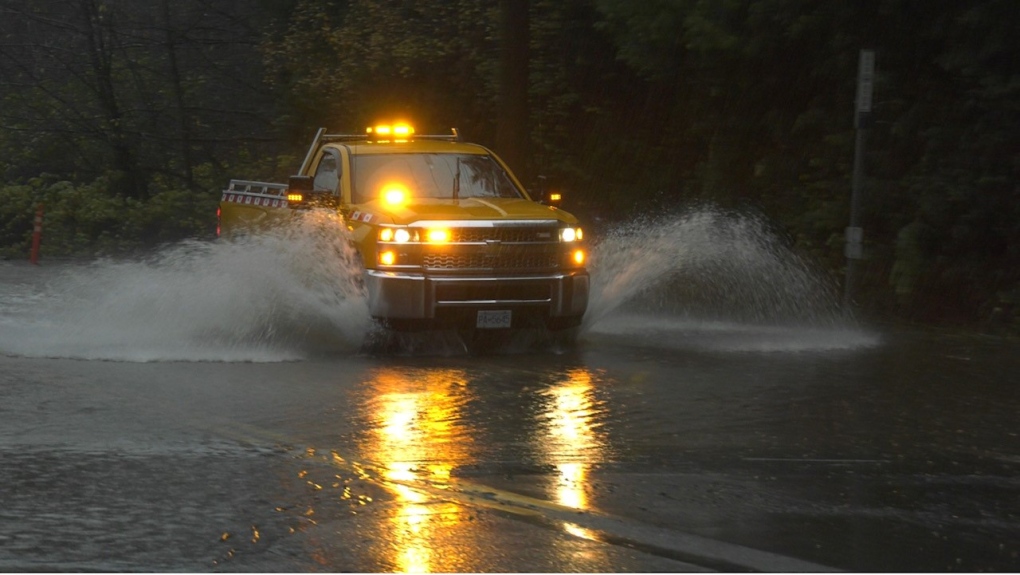 "Goldstream to Mill Bay have reported the highest rainfall amounts of 140 to 160 mm so far, while most locations have received 60 to 90 mm," Environment Canada said shortly after 6 a.m.

Road maintenance company Emcon Services reported the Trans-Canada Highway had flooded at Drinkwater Road in Duncan, urging drivers to use caution in the area.

Western Vancouver Island is on track see between 100 and 150 millimetres of rainfall, according to the weather service.

The BC River Forecast Centre has issued a flood warnings for the Englishman River near Parksville, the Cowichan River near Duncan and the Koksilah River to the south at Cowichan Station.

"The public is advised to stay clear of the fast-flowing rivers and potentially unstable riverbanks during the high-streamflow period," the river forecast centre said in a statement Monday morning.

Additional flood watches are in effect for southern Vancouver Island, while all rivers on the south and central island are the  subject of high streamflow advisories.

The heavy rainfall is expected to subside around noon as the weather system moves south.