She prefers to remain anonymous, but a Campbell River, B.C. woman is gathering a reputation for her work in creating snow sculptures that are delighting the public.

"You can refer to her as the 'Snow Ninja' who comes around and builds her sculptures, so the Snow Ninja is what she would like to be called," said Jessica Calado who lives near the sculptor. "Yeah which I mean is pretty good, it fits."

The woman’s latest creation is a dinosaur, but recent works include a dragon as well as a Grinch sitting on a chimney. 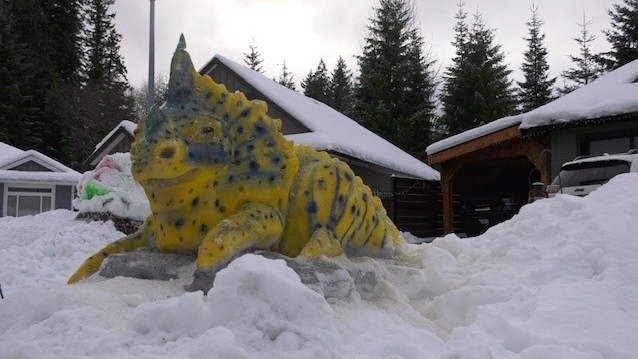 The latest snow sculpture, a dinosaur, to appear in Campbell River is shown: (CTV News)

"She absolutely loves him at Christmas time and she wanted to build the Grinch sitting on a chimney and it was amazing, honestly, when she finished him, he looked crazy," said Calado.

"I couldn’t believe that she had sculpted that from snow." 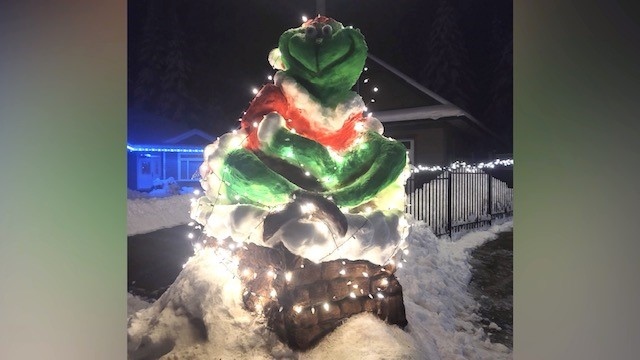 While the Grinch has become extinct because of the weather, the dinosaur lives on, complete with its bright yellow colouring using environmentally friendly paints.

"I don’t know where she gets the vision to mix all the colours, I mean I can paint but I can’t do this," said Calado. "This is definitely (someone who has) an eye for art."

Calado says the artist is hoping more snow arrives in Campbell River so more sculptures can be created.

"We’re hoping that we get another good snow and I can help her with her next project," she said.

"You never really know what you’re going to get out of it, I guess it’s the way the snow wants to shape and you just kind of run with it from there."

The sex assault trial of Canadian musician Jacob Hoggard is hearing from a limo driver who drove one of the complainants to and from the Hedley frontman's hotel in 2016.