A family road trip through Alberta took a dramatic turn for the mayor of Courtenay, B.C.

Bob Wells was driving on a highway just outside Red Deer, Alta., on Monday when a severe hailstorm swept across the region.

About 70 vehicles were caught up in the storm, according to RCMP, with hail reaching the size of tennis balls — or even the "size of grapefruits," Wells said in a live video shortly after the storm.

Wells says the hailstones started off small before ramping up.

"When the hail started my kids had never seen hail, and I said, 'Oh yeah they're little pebble-sized hail and they can't hurt and you stuff," Wells told CTV News.

But then the hail grew larger and a piece about the size of a golf ball cracked the family's car windshield.

Once the windshield cracked, Wells pulled over to the side of the road, and rows of vehicles behind and in front of him followed suit. His family also covered themselves in blankets in case any windows broke. 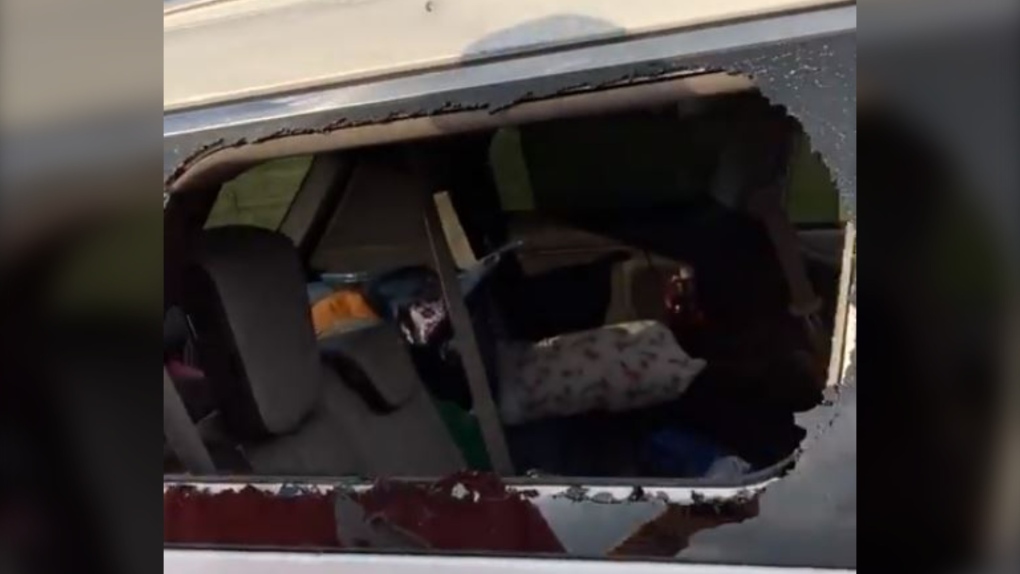 The mayor adds that the covers underneath each sunroof needed to be held up by hand by him and his 11-year-old son to prevent the hail from crashing into the car.

Police and paramedics were quick to arrive at the scene, and no major injuries have been reported.

Wells says his family has some bruising from holding up the sunroof covers, as well as some small scrapes.

"We still have little shards of glass embedded in our skin that we can't remove," he said, but he described the injuries as "not serious."

Another driver told CTV News that they suffered a mild concussion and that their friend is being checked for broken ribs.

"[I'm] really thankful. There was first responders on scene, I would say, within five minutes," said Wells.

The damaged vehicle is show after the hailstorm. (Bob Wells/Facebook)

The mayor urges everyone to be prepared for potential extreme weather emergencies, no matter where they live.

"In Courtenay and Comox Valley, eight years ago we had unbelievable storms that ended up giving us a 48-day boil water notice," he said.

"All these kinds of events are becoming more frequent and severe. We as a society should be doing our best to mitigate that as much as possible," he said.

While the island family is physically OK, Wells says the storm rattled them at the time.