A new multimillion-dollar roundabout is being planned in Sidney, B.C., near the grounds of an Amazon distribution centre that's currently under construction.

The roundabout is coming to the intersection of Beacon Avenue West and Galaran Road, and the project will also include realigning Stirling Avenue so that it connects to the roundabout.

The Town of Sidney announced the $4.9-million project on Monday, alongside the District of North Saanich and the Victoria Airport Authority.

The three organizations agreed upon a memorandum of understanding to build the roundabout, with Sidney and the Victoria Airport Authority contributing 40 per cent of project costs each, and the District of North Saanich covering the remaining 20 per cent.

The Town of Sidney says traffic concerns about this intersection have been flagged as far back as 20 years ago.

When the 115,000-square-foot facility was approved for construction last summer, one of the development requirements was to build a roundabout at Beacon Avenue West and Galaran Road to manage increased traffic and large delivery trucks. 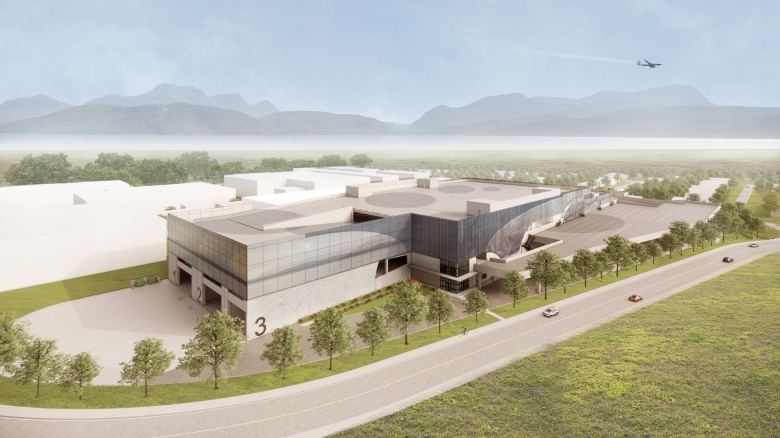 A rendering of the Amazon delivery station is shown: (Victoria International Airport)

"It is exciting to see this much-needed improvement to West Sidney’s transportation infrastructure coming to fruition," said Sidney Mayor McNeil-Smith on Monday.

"Our future looks brighter when we have the infrastructure to support economic growth and the needs of residents in our wider community."

The town says detailed designs for the roundabout are still being developed, but further information is expected to be released soon. Construction of the roundabout and realignment of Stirling Way is estimated to finish in fall 2023.

In August, the $65 million Amazon facility was expected to open in fall 2022.