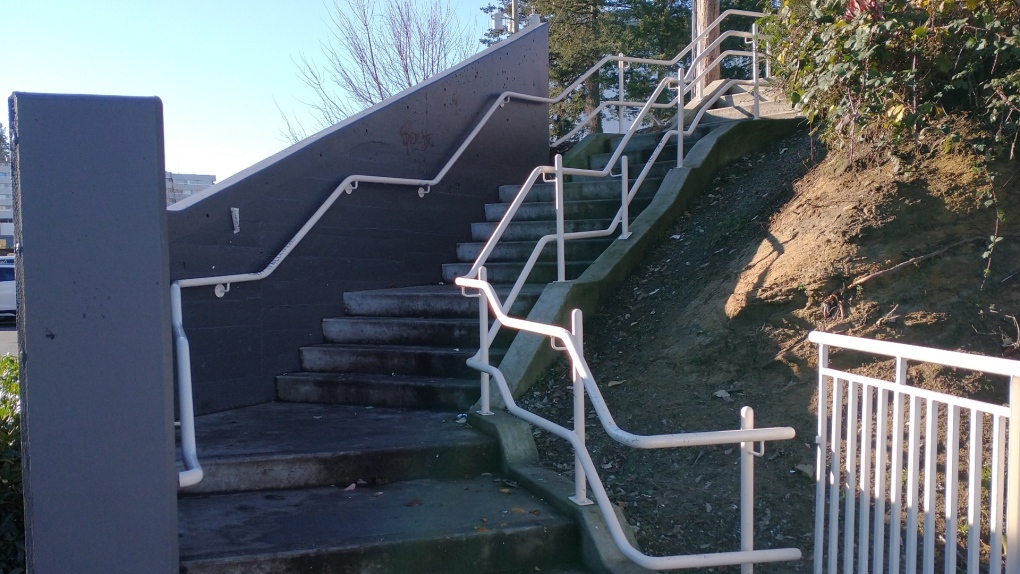 The stairwell where the assault took place is shown: (Nanaimo RCMP)
Victoria -

Nanaimo RCMP say a recent attack on a senior is being treated as a "priority."

The alleged assault occurred on Saturday afternoon in front of the Nanaimo Military Museum on Front Street.

Mounties say the victim, 82-year-old Pat Murphy, who's been a long-time volunteer at the museum, was attacked after he asked a group of homeless people to clear off a stairway leading to the museum.

Murphy reportedly asked the group of about 10 people to move so that two women carrying bags could use the stairs safely.

After asking the group to move, police say Murphy was assaulted by a man.

"Suddenly and without warning, Murphy was punched on the left side of his face," said the Nanaimo RCMP in a release Tuesday.

"He was momentarily stunned but managed to defend himself by punching and kicking the suspect."

The man then fled the area on foot and was last seen running northbound on Front Street, according to the Nanaimo RCMP.

A nearby security guard witnessed the event and called 911. Police rushed to the scene but were unable to find the man, Mounties said. Murphy declined any medical treatment.

The man is described as a white male aged 20 to 25 who stands 5'11" with a very thin build. He has dark hair, some facial hair, a "prominent chin" and was wearing a baseball cap, grey hoodie and black jacket at the time.

"This incident is troubling and our detachment is treating it as a priority," said Const. Gary O’Brien of the Nanaimo RCMP in a statement Tuesday.

Murphy added that gatherings at the stairwell in front of the museum have become a "chronic issue," with garbage and debris building up in the area.

Some encounters have been positive though, with police saying that earlier on Saturday, a group of four or five men swept up the area after speaking with Murphy and being given brooms.