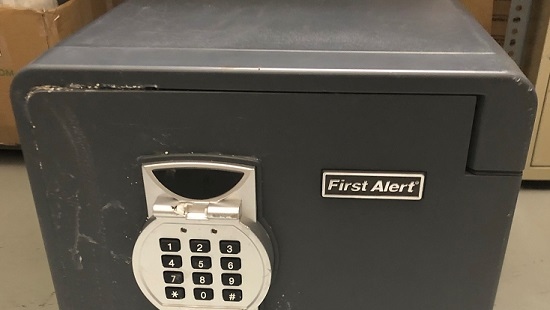 The West Shore RCMP are hoping to reunite a safe with its rightful owner after it was retrieved under suspicious circumstances on Tuesday evening.

Police say they were called to the 2300-block of Belair Road in Langford, B.C., after Mounties received a report of two people leaving a shopping cart full of miscellaneous items on the side of the road around 4:15 p.m.

When officers went to investigate, they found a range of items, including a safe that measures roughly half a cubic metre.

Police say the First Alert-brand safe was still locked when they found it, and now Mounties are trying to identify the owner, as well as the two people who dropped off the shopping cart.

The first individual is described as a white woman in her early 30s who stands 5'6" tall with a medium build. She has white or blonde hair and was wearing a grey Lululemon coat and brown tights at the time.

The second person is described as a white man in his 40s who is taller than 6' with a slim build. He was wearing a white, stained T-shirt, a black zipper hoodie, baggy jeans and a black baseball cap at the time.

Anyone with information on the safe's owner or the two suspects is asked to call the West Shore RCMP at 250-474-2264.