Dozens of protesters in multiple vehicles took to the streets of Campbell River, B.C., and surrounded the city's RCMP detachment to mark the one-year anniversary of an Indigenous man's death during a police incident.

On July 8, 2021, Mounties say that officers tried to pull over Jared Lowndes on outstanding warrants, but that he fled the scene in his truck.

His vehicle was found later in the parking lot of a local Tim Hortons, where police then boxed in his vehicle with their own.

Police said they deployed a service dog named Gator to subdue Lowndes, who then stabbed and killed Gator and injured the dog's handler in the altercation.

Mounties then shot and killed Lowndes.

The incident sparked swift backlash from Lowndes' family and friends, who said there was no need to deploy a police dog or use lethal force in the incident.

An investigation by B.C.'s police watchdog, the Independent Investigation Office, was launched after the incident and the review is still underway one year later. 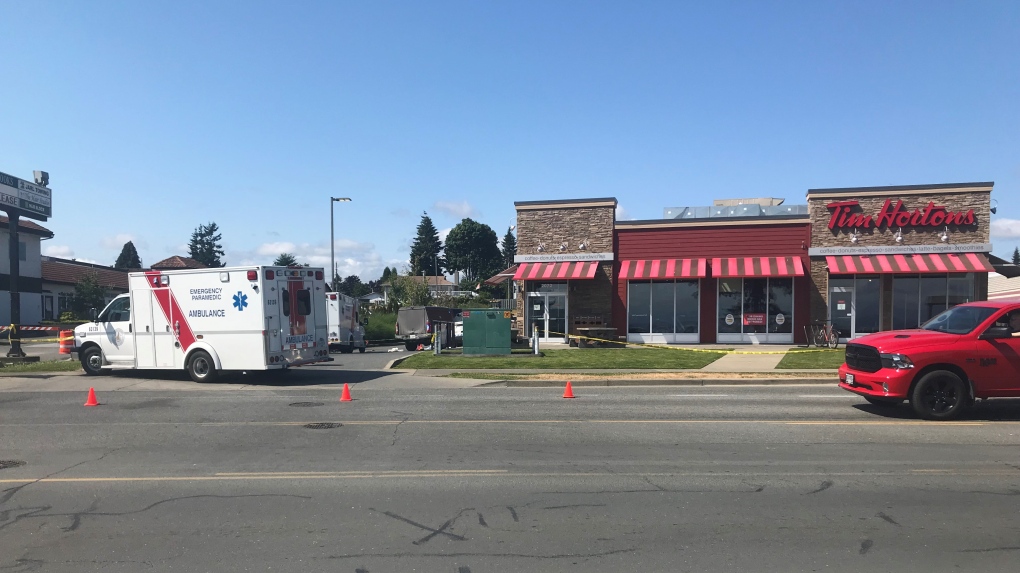 On Friday, about 40 people in 10 vehicles drove through Campbell River to mark the anniversary of the Lowndes' death, according to RCMP.

The march reportedly blocked a section of Rockland Road in both directions, leading to some frustration from other motorists who tried to "physically intervene," police say.

Mounties were at the protest to try to direct traffic before the protesters arrived at the Campbell River RCMP Detachment, where they filled the parking lot and front doorway, according to RCMP.

Mounties say the protesters used megaphones to voice "derogatory comments" towards police, and painted graphic images at the doorway of the RCMP detachment.'

In a release Friday, protest participants said they had lost their faith in third-party reviews by the IIO.

"There are currently four open IIO Investigations into deaths at the hands of the Campbell River RCMP," reads the release. "While these supposed investigations are done independently, the reality is they shroud police conduct in secrecy. The RCMP must be subject to public scrutiny."

Laura Holland, Lowndes' mother, hopes that an external investigation into the incident, in addition to the IIO review, can take place.

Martha Martin – mother of Chantel Moore, who was from Vancouver Island and was killed by police in New Brunswick, and Mike Martin, who died by suicide not long after – was at the march Friday and supports Holland's call for additional police reviews.

"As a mother of two children killed by police and prisons, I have no faith in recommendations. We need action and we need it now," she said in a statement Friday.

"I am walking with Laura Holland because I understand her pain – as a mother who has lost children to police violence," she said.

Campbell River RCMP say they're investigating any criminal elements of the protest, and are seeking any videos or photos of the event.