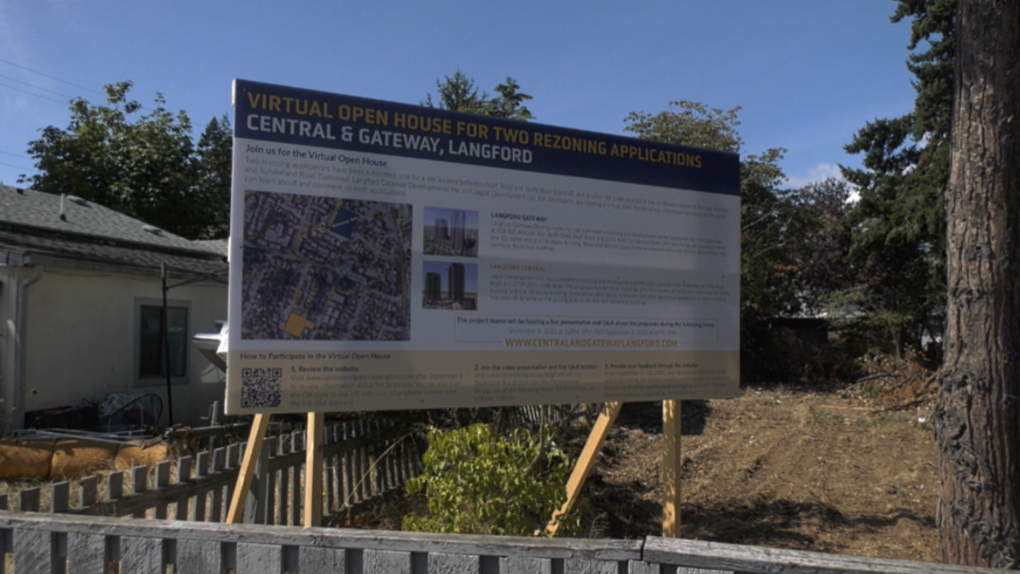 A rezoning application sign for the Langford Gateway and Langford Central projects on Peatt Road as seen on Sept. 15, 2021. (CTV News)
Langford, B.C. -

Residents in two Langford neighbourhoods are complaining that two proposals to build four high-rise condo towers are not a good fit for the area.

The Langford Gateway development has put forth a rezoning application that would see 22- and 18-storey residential buildings on land located between Peatt Road, Arncote Avenue and Sunderland Road in Langford. The project includes retail space and a daycare centre on the ground level, and would be built in two phases.

One resident who has lived on Sunderland Road for the last 11 years is concerned about the size and the density of the development.

“This is all single family homes, (a) little cul de sac, it’s a half a block long and when I first moved here there was little kids playing,” said Sunderland Road resident Richard Cuthbert.

“Langford has better spaces (that) are more appropriate for a 24-storey condo tower than right here in the middle of a three-storey neighbourhood.”

Meanwhile, just two blocks away, Jagpal Developments has also submitted a rezoning application the Langford Central project between Peatt and Scafe Roads. The development would see 269 condos in one 24-storey tower and 271 units in an adjacent, 18-storey building. The Langford Central proposal would also see a mix of commercial space and a daycare on the ground floor level.

Cuthbert says he is concerned that with more than 500 new families living in his neighbourhood, area roads will become more congested with traffic. He says he has had to call the city on a number of occasions to move cars blocking the driveway of his Sunderland Road home, and fears the problem of parking will only get worse.

“Its already a nightmare, everyone who lives in Langford knows congestion is crazy,” said Cuthbert. “Adding 250 plus suites across the street, I can’t even imagine that.”

Cuthbert has started a petition requesting that the City of Langford reconsider the scope and density of the Langford Gateway project. He says he is canvassing areas residents for support and has already received more than 30 signatures.

Langford’s mayor says he is aware to the concerns of the residents in the two Peatt Road neighbourhoods, but he says he likes the projects because they offer an affordable housing option for families.

“We don’t want a bunch of six-storey rentals all over Langford, we want home ownership, so condo towers are what we need,” said Langford Mayor Stew Young. “People can buy a condo in the downtown core of Langford, work and get their recreation there, which is ideal.”

Young says the West Shore community has done a good job in developing more rental units for its residents, but what is needed now are more condo units that provide affordable home ownership.

“So you can actually buy a unit for the price that you are renting at now,” said Young. “We need something to take the place of a single family house, because they cost $900,000 and up, and nobody has that kind of money when you are starting out.”

“We have to have the ability to go in to the air-space instead of spreading out in six-storey rental buildings,” said Young. “Home ownership in the $300,000 to $700,000 range is what we need in Langford right now.”

Cuthbert says he understands everyone wants development in Langford, but he says it should be reasonable development.

“We would like something out on this block that matches the rest of the neighbourhood,” said Cuthbert. “I like Langford, its a nice place for people with boats and campers and trucks, and we could afford to live here, but now we’re getting forced out.”

The rezoning applications for the two developments could be presented to Langford City Council as soon as Oct. 4.

A growing number of Canadian hospitals are enacting policies requiring visitors and care partners to show proof of vaccination in order to gain entry, sparking yet another pandemic-era debate for ethicists.

Missionary group confirms kidnapping of one Canadian, 16 Americans in Haiti

A Canadian was among 17 missionaries allegedly kidnapped in Haiti on Saturday, Christian Aid Ministries said in a statement on its website.

COVID-19 vaccine booster eligibility by province and territory in Canada

Although booster shots and third doses of COVID-19 vaccines aren't currently recommended for most Canadians, additional doses are being made available to certain populations or those who need to travel for work based on their province or territory of residence.

A rescue mission got underway Sunday for a firefighter who fell into the St. Lawrence River after a boat carrying people from a previous rescue mission capsized near the Lachine Rapids.

Gov. Gen. Mary May Simon set out on her first international trip in that position on Sunday, heading to Germany to meet with officials, as well as attend the world’s largest trade book fair.

Hayley Wickenheiser is a six-time Olympian and award-winning women's hockey player, and now her accomplishments include graduating from medical school and achieving an M.D. during a global pandemic.

Having trouble sleeping was commonplace for people with mental illness, according to one of the largest studies of its kind conducted by researchers at the Centre for Addiction and Mental Health.

World expected to consume twice as much seafood by 2050, new findings suggest

The world will consume twice as much seafood by 2050, according to new research. But despite the increased demand, a stronger turn to sustainable fishing could help address malnutrition and lower our overall environmental footprint.