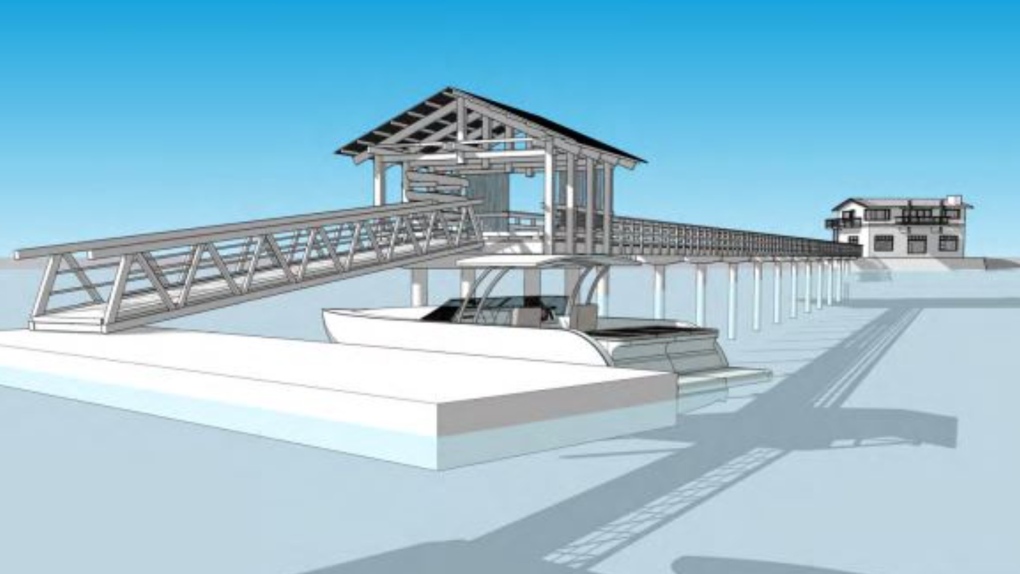 The new dock would replace a previous structure, whose creosote pilings would be replaced with an environmentally sound steel structure, according to the submission to council. (Darryl Jonas)

The town council of Ladysmith, B.C., has approved a development variance permit that will allow actress Pamela Anderson to erect a large private dock next to her family's waterfront property.

The new dock is part of a "small-scale residential development" that the film star and animal rights activist is planning to accommodate family members on her sprawling property, according to a letter submitted to council by architect Darryl Jonas.

The variance permit was required due to the dock's size, height and position over an intertidal zone and public right-of-way.

The structure would connect to an existing boathouse that encroaches onto Crown land, adjacent to a shellfish farm.

A drawbridge-style gangplank would connect the dock with the boathouse, which contains a residential dwelling, allowing public access on the shoreline right-of-way, council heard at its Jan. 25 meeting.

The new dock would replace a previous structure, whose creosote pilings would be replaced with an environmentally sound steel structure, according to the submission to council.

However, the new dock would reach up to 140 metres in length, well beyond where the previous structure ended in shallower waters.

The dock design calls for a metal-grate surface to allow sunlight to filter through, allowing eelgrass and other tidal-zone marine life to grow.

The design also includes a covered shelter on the end with marine floats to accommodate moorage for boats, kayaks and paddleboards.

Council approved the variance permit, with Coun. Marsh Stevens casting the only dissenting vote due to his concerns about the number of boats potentially docking at the site.

Jonas is expected to submit a comprehensive development plan for the site early this year.

The Chemainus Road property has been in the Anderson family for 70 years, according to the architect.