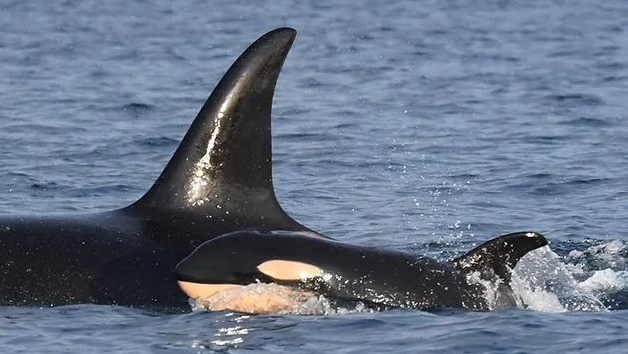 Researchers say the new calf's sex is unknown but the orca appears to be in good physical condition. (Center for Whale Research)

A new orca calf has been spotted off British Columbia's south coast, marking the first birth for the J-pod of southern resident killer whales in over a year, according to researchers.

The new calf was identified Tuesday by a researcher with the Washington state-based Center for Whale Research.

The calf was spotted with its mother, known as J37 or "Hy'Shqa," off San Juan Island, Wash., just east of Victoria.

Researchers say J37 was last seen on Feb. 22 and did not have a calf with her at that time.

That detail, coupled with the new orca's "lumpy" appearance, led researchers to determine the calf was born "within the past few days," according to the research centre.

The newborn has been designated J59 and is the first new calf for J-pod since September 2020, according to the centre.

Researchers say the calf's sex is unknown but the orca appears to be in good physical condition.

The fatal film-set shooting of a cinematographer by actor Alec Baldwin last year was an accident, according to a determination made by New Mexico's Office of the Medical Investigator following the completion of an autopsy and a review of law enforcement reports. The medical investigator's report was made public Monday by the Santa Fe County Sheriff's Office along with numerous reports from the FBI on the revolver and ammunition that were collected following the shooting.

While many Canadians don’t support moving away from the metric system of measurement, many continue to use imperial measurements in their daily lives, according to a recent online poll.

Actress Bryce Dallas Howard said she was paid 'so much less' than her co-star Chris Pratt for their work in the 'Jurassic World' films.

'This is our land': Wet'suwet'en hereditary chiefs, pipeline opponents rally in Vancouver

Opponents of the Coastal GasLink pipeline currently under construction in Northern B.C took to the streets of Vancouver Monday, briefly blocking north-bound traffic on the Cambie Street Bridge.

The international community needs to step up to hold the Taliban accountable for human rights abuses in Afghanistan, a year after the militant Islamist group took control of the country and limited the rights of women and girls, according to Heather Barr, associate director of the Women's Rights Division of Human Rights Watch.