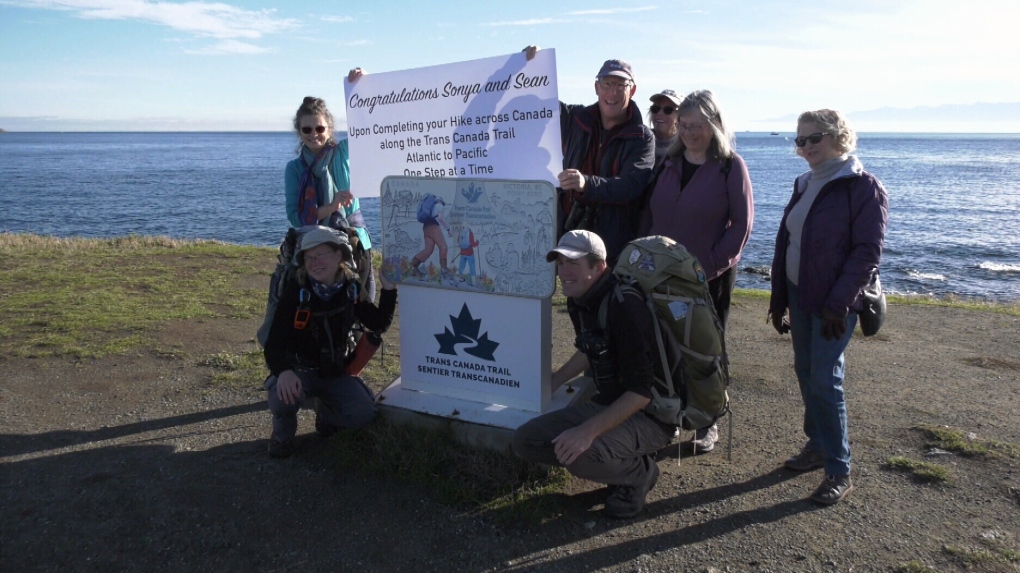 A couple of adventurers from Ontario have completed the hike of their life by walking the Trans-Canada Trail from coast to coast.

Hikers Sean Morton and Sonya Richmond say the goal of the 556 day odyssey from Cape Spear, N.L., to Victoria, B.C., was to encourage people of all ages, physical abilities and cultural backgrounds to connect with nature through birds.

"We wanted to connect youth to nature through birds," said Sonya Richmond. "They’re something that anyone can connect to."

"They’re free, they’re fun to watch and they are literally everywhere," she said. "If you go outside you’ll see or hear at least one bird, so it's a great way for everyone to connect with nature."

The couple started their trek from Cape Spear on July 1, 2019, and began the last stretch of their 13,716 kilometre coast to coast hike on Thursday at the B.C. Legislature.

Aside from spending winters at their home in Richmond Hill, Ont., the pair spent a total of 556 days on the Trans-Canada Trail.

The couple documented their journey by taking more that 750,000 photographs of birds, wildlife and people.

They have also captured more than 400 images of birds which they uploaded to their website, Come Walk With Us.

"We thought the best way for people who are interested in being online to connect with nature may be to combine their 'screen time' with their 'green time,'" said Sean Morton.

"We’ve taken pictures of birds, landscapes, people and cultures all across the country all in an effort to show people how amazing the country is," he said.

Morton says that over the course of their cross-Canada trek, the couple have each worn through 10 pairs of shoes and boots in addition to five pairs of sandals.

He says he also destroyed four cameras documenting the journey.

"Almost nothing from day one has survived except for some clothes and our backpacks," he said. "Everything else has now been replaced."

As the couple completed day 556 of their walk across the country, they strolled along the almost six-kilometre portion of the Victoria section of the Trans-Canada Trail.

Richmond and Morton passed by Victoria’s Fisherman’s Wharf then traveled along the city waterfront on Dallas Road before arriving at Clover Point where they both dipped their hands in the Pacific Ocean.

Richmond says travelling from Canada’s east coast to the west coast by foot gave her a different perspective of the country.

"You connect with the people, you see far more nature if you are going at the slow pace of walking," she said. "It's a completely different experience and it's so worthwhile."

With the coast to coast legs of their Trans-Canada Trail journey completed, both Richmond and Morton will return to their home in Ontario to rest and work. They plan to hike the final approximately 3,900 kilometre leg of the Trans-Canada Trail from Fort Saskatchewan, AB, to Tuktoyaktuk, NWT, in the spring of 2023.

The pair says they'll continue to try to connect Canadians with nature one step and one bird at a time.