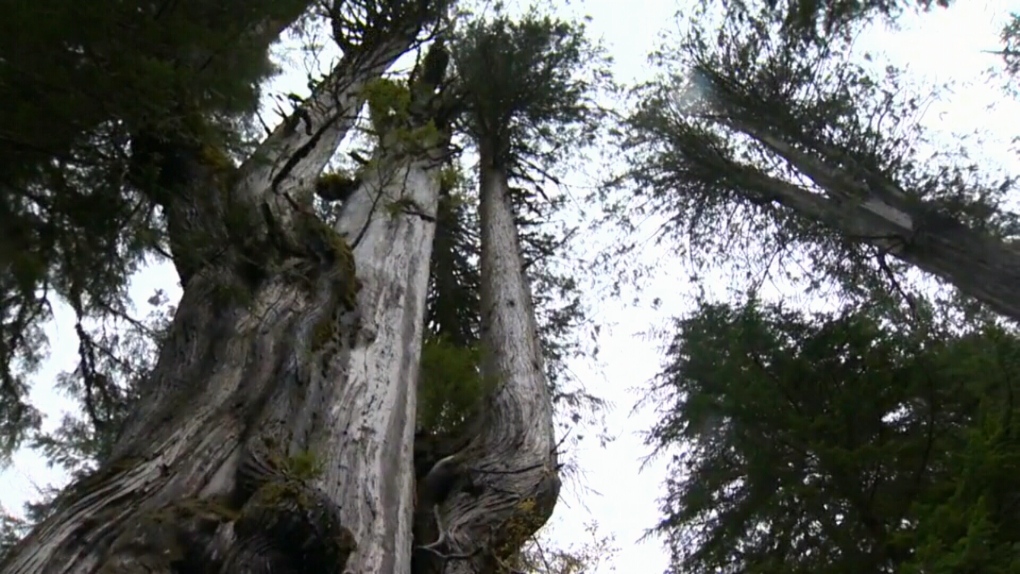 An old growth tree is pictured in this undated CTV News file photo.

A group of activists calling itself "Save Old Growth" says it plans to block the Trans Canada Highway in several places across B.C. on Monday.

In a news release Sunday, the group said it will begin by blocking Highway 1 off-ramps in Vancouver, Victoria, Nanaimo and in the Interior near Revelstoke on Jan. 10, and plans to continue blocking the route "multiple times per week."

"The frequency and scale of actions will escalate until all old-growth logging is stopped," Save Old Growth said in its release.

The group calls itself "a new civil resistance movement that will see ordinary people risking everything to protect the lives of their families from the effects of the corporate destruction of our world."

Old-growth logging in B.C. has long been a source of controversy, but anti-logging activism has seen renewed attention over the last two years since protesters began camping out in the Fairy Creek Watershed on southern Vancouver Island.

Teal Cedar Products, Ltd. holds forestry licences in the area, which activists describe as the South Island's last unprotected old-growth forest. Mounties have made more than 1,000 arrests in the watershed since the B.C. Supreme Court issued an injunction prohibiting the protesters from interfering with the company's logging operations.

The Fairy Creek fight has extended to the rest of Vancouver Island and the rest of the province, with the B.C. government promising to defer logging on 2.6 million hectares of old-growth forest as part of a new old-growth strategy.

The government's efforts have faced criticism from both industry and the First Nations it has asked to help identify and sign off on deferral areas in their traditional territories.

Some nations have complained that the 30 days they were given to respond to the government's deferral plans was insufficient, as is the financial support promised to help nations engaged in old-growth logging to transition their economies.

Meanwhile, the industry has accused the government of bowing to pressure from activists, harming the livelihoods of those employed in the forestry industry while failing to satisfy those who want an immediate end to all old-growth logging in the province.

It's clear from Save Old Growth's statement that the group is, indeed, unsatisfied with the province's efforts.

"We don’t want to be doing this, but Forestry Minister (Katrine) Conroy, Premier (John) Horgan and the NDP government have failed to keep their promise to stop active old-growth logging and therefore, further guarantee ecological collapse," said a campaign organizer identified only as "Johannah, a 19-year-old university student," in the release.

"This scale of disruption is our last resort."

With files from Ian Holliday