Protesters who have been embedded in the forests of the Fairy Creek watershed of Vancouver Island for months allege police officers have ramped up their tactics and the situation is becoming unsafe.

Old-growth logging activists, who have opposed the logging of ancient trees on southern Vancouver Island for over a year, say in the past three weeks police brutality and officer negligence has put their lives in danger.

"It's clear as day that police are escalating their tactics and being extremely reckless and violent," said Rain Forest Flying Squad spokesperson, Luke Wallace.

A call for Mounties to remove themselves from remote logging roads where they are enforcing a court ordered injunction against protesters was amplified when a video surfaced over the weekend.

The cellphone video shows police unleashing a barrage of pepper spray on a group of protesters they had been trying to remove from a logging road.

Activists say the video is an example of harsher tactics they have faced in recent months.

"Isn't that the definition of insanity, doing the same thing over again and expecting a different result?"

Protesters also say RCMP officers continue to ignore a recent court ruling which said their suppression of media and use of exclusion zones was unlawful.

Mounties have used exclusion zones, which essentially make an area off limits for protesters, since the beginning of their enforcement of the court ordered injunction to remove protesters in May.

In response to the video posted widely on social media, protesters came out in force to several RCMP detachments on Vancouver Island, and also in Alberta and Ontario on Monday.

A group of several hundred protested outside the Vancouver Island RCMP headquarters on Nanaimo Street, just off Blanshard Street in Victoria.

The group chanted for the RCMP to leave the Fairy Creek area. 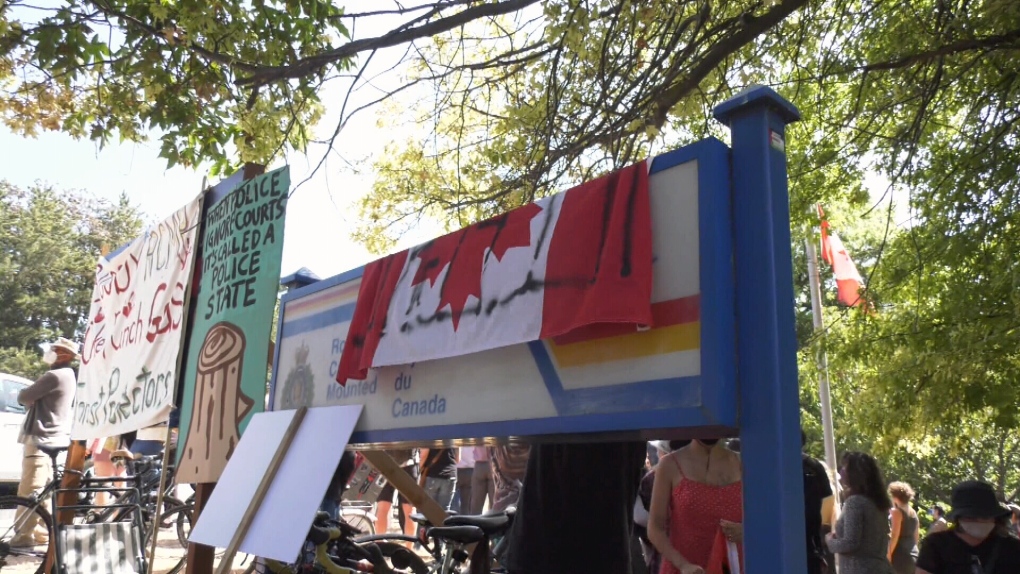 Hundreds of people protested outside of the Vancouver Island RCMP headquarters in Victoria: (CTV News)

Facing a wave of criticism, Mounties fired back on Monday.

The RCMP says it has in no way ramped up its tactics in recent weeks, but does say due to a higher number of protesters in the area there have been more encounters with activists.

"The officers actions are dictated by the protesters' actions and the number of arrests in recent weeks has climbed because we are dealing with more protesters in the area," said RCMP communications officer Sgt. Chris Manseau.

Police also say they are working with their legal team to properly act within a judge's new rules on exclusion zones. Officers also say in the new ruling they are still allowed to have small exclusion zones for short periods of time.

Police say prior to the use of the irritant, an officer was pushed into a deep ditch and knocked unconscious.

Mounties say the pepper spray was only used to quickly break up the large group of protesters so a helicopter could be used to medivac the officer to hospital.

Police say his injuries were serious, but not life-threatening, and he spent two days in medical care.