No tsunami expected after earthquake off Vancouver Island Saturday 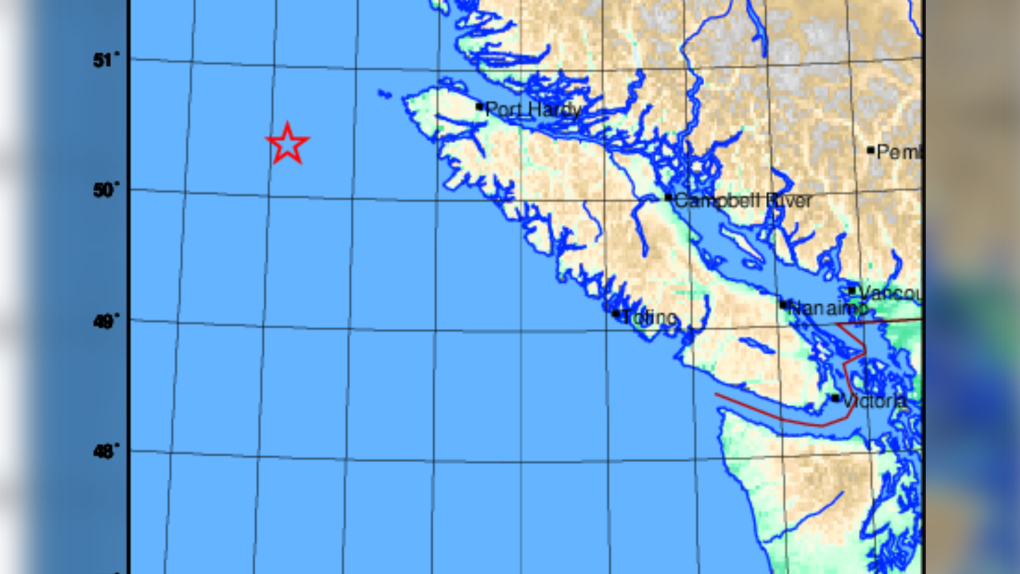 The approximate location of the quake is shown on this map from Earthquakes Canada.

No tsunami is expected after an earthquake struck off the northwest coast of Vancouver Island Saturday afternoon.

Earthquakes Canada shared details on the quake on Twitter shortly before 2:30 p.m., initially tweeting that the magnitude was 4.1, before revising that calculation up to 5.0.

The federal agency said the earthquake was centred 166 kilometres west of the village of Port Alice on Vancouver Island's west coast.

The quake happened at a depth of 10 kilometres and was not felt, according to Earthquakes Canada, though at least one Twitter user claimed to have noticed some shaking.

Geoffrey Batchelar told CTV News he was having lunch at home in the village of Coal Harbour on the north island when he felt the quake.

"It felt like the chair became a gel bag and I was pushed up like going over a speed bump quickly," he said in a message to CTV News.

He added that it's the first time he's ever felt an earthquake.

The U.S. National Tsunami Warning Centre and Emergency Info BC said no tsunami was expected.

Canadians going hungry: How inflation's hitting some harder than others

Billionaire Elon Musk took to Twitter late on Thursday to denounce as 'utterly untrue' claims in a news report that he had sexually harassed a flight attendant on a private jet in 2016.

Blocking inflammation may be why some pain becomes chronic, study finds

A new Canadian study has found that using anti-inflammatory drugs and steroids after injury may actually increase the chances of developing chronic pain.

British royalty and Hollywood royalty came together on the red carpet for the charity premiere of the new Tom Cruise movie, "Top Gun: Maverick," on Thursday night.

A recent study revealed that COVID-19 rapid antigen tests may be less sensitive to newer variants, leaving some to wonder just how accurate these tests actually are. Experts share how to get the most accurate results when testing for the virus.

The stakes are high as Canadian farmers take to the fields to plant 2022's crop, which some are saying could find a place in the record books as 'the most expensive ever.'