More than a week after a marine barge ran aground near Victoria during an intense windstorm, there is still no timeline for the vessel's removal, according to federal officials and the company responsible for the watercraft.

The cement barge, known as Metlakatla I, broke free of its tow cable and drifted onto the rocks at McLoughlin Point on the evening of Nov. 29, as high seas forced the cancellation of multiple ferry sailings in the region.

By Wednesday, the barge had drawn hordes of onlookers to the Esquimalt, B.C., waterfront but little in the way of recovery work.

Transport Canada says Lafarge Canada, which owns the barge, has conducted a damage assessment on the vessel to determine what actions are required to safely refloat the vessel.

The federal agency was still working with the company to finalize that salvage plan Wednesday.

"The particular details regarding the recovery of the barge are the purview of the owner's representative and the timing of the removal remains to be confirmed," Transport Canada spokesperson Sau Sau Liu said.

"The removal is a complex issue, with several factors to consider in addition to tide levels and weather, including safety, security and environmental protection." 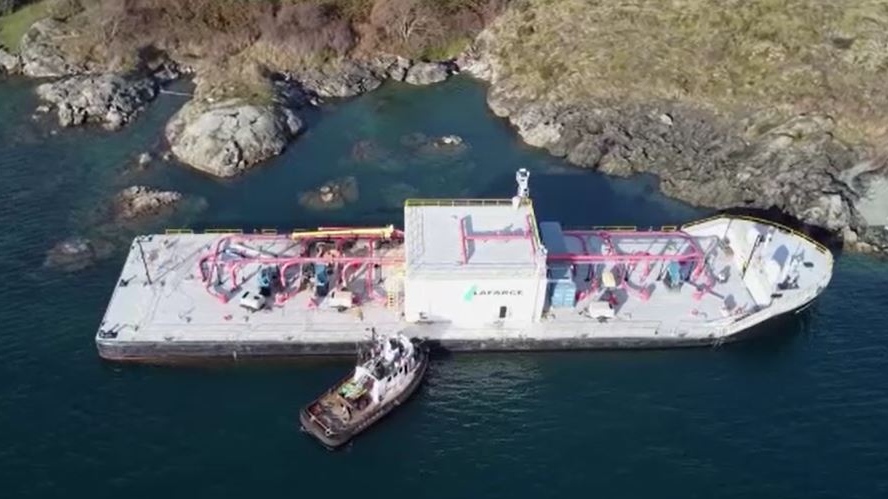 Lafarge Canada confirmed it was still forming its salvage plan Wednesday with no firm recovery timeline in place. (CTV News)

Lafarge confirmed it was still forming its salvage plan Wednesday with no firm recovery timeline in place.

"We are working with Transport Canada and necessary partners to implement a safe and prompt recovery plan," company spokesperson Anna Salomao said.

The federal agency says the barge contains no fuel and poses no threat to the safety of residents or the marine environment.

Newly discovered asteroid makes one of the closest approaches of Earth

An asteroid the size of a box truck made one of the closest passes of planet Earth ever recorded.

The federal privacy watchdog says Home Depot shared details from electronic receipts with Meta, which operates the Facebook social media platform, without the knowledge or consent of customers.

Canadians worried about the state of provincial health systems: poll

A new survey suggests the vast majority of Canadians have concerns about the state of the health-care system, particularly in Atlantic provinces where hospitals have struggled to maintain emergency services for months. Leger and The Association for Canadian Studies surveyed 1,554 Canadian adults over a two-day period in January.

Retain nurses before recruiting nurses from other provinces: association

Efforts to lure nurses from other provinces are underway in several parts of the country, but the head of a national nurses association says the poaching won't solve anything unless working conditions are improved.

Auschwitz-Birkenau survivors and other mourners commemorated the 78th anniversary Friday of the liberation of the Nazi German death camp, some expressing horror that war has again shattered peace in Europe and the lesson of Never Again is being forgotten.

Canada sends four combat-ready battle tanks to Ukraine, a Russian warship armed with advanced missiles sails into western Atlantic, and Canadians fighting in Ukraine speak out. Here's what you need to know to start your day.