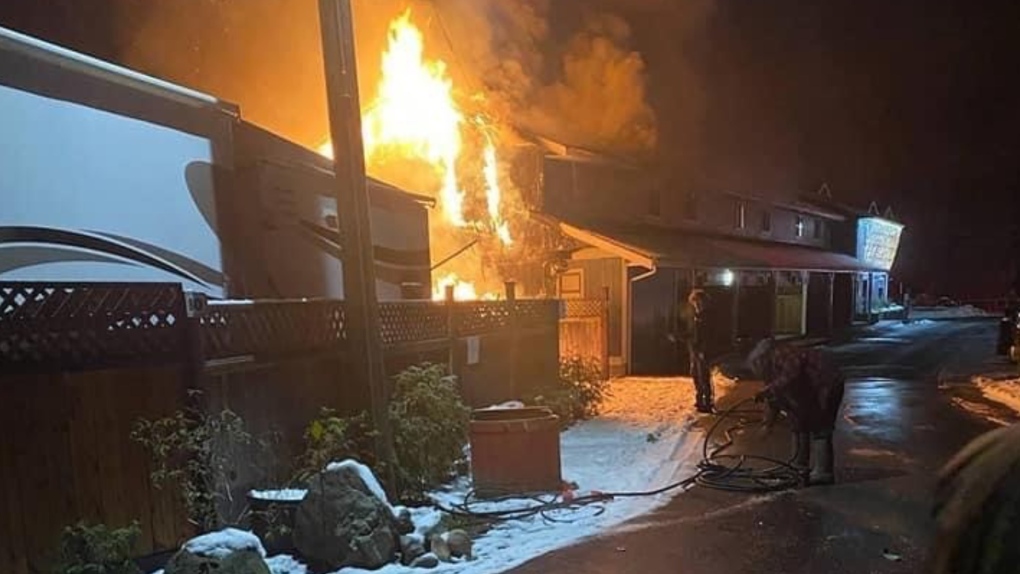 The RV and motel unit were unoccupied at the time and there were no injuries. (Dashwood Volunteer Fire Department)

A Sunday night blaze at an RV park in Qualicum Beach, B.C., drew a large response from firefighters.

Crews were called to the Riverside Resort for a report of a structure fire and found a motor home on fire with the blaze spreading to a nearby motel unit.

“Crews deployed a two-and-a-half-inch attack line and extinguished the bulk of the exterior fire, then crews entered the motel unit to extinguish the fire in the attic space," said Dashwood fire Chief Nick Acciavatti.

The attic space was inside the motel unit and crews were able to contain the blaze to the area.

The RV and motel unit were unoccupied at the time of the fire and there were no injuries.

The cause of the fire is undetermined at this time.

More than five years since Canada’s Competition Bureau began an investigation into an alleged bread-price fixing scheme, no conclusions have been drawn nor charges laid. As the watchdog is now probing whether grocery stores are profiting from inflation, one expert says the effectiveness of its tools are in question.

Health Canada is reviewing the safety of domperidone amid reports that some breastfeeding mothers in Canada and the U.S. have had serious psychiatric symptoms when they tried to stop taking the drug.

Ukraine on mission to ban Russia from Paris Olympics

Ukraine hopes to secure widespread international support for banning Russian and Belarusian athletes from the Paris Olympics due to Moscow's invasion, the sports minister said on Tuesday.

More disciplinary action may be coming now that the harrowing video of Tyre Nichols' treatment has been released. The Memphis police department is among many U.S. law enforcement agencies with 'duty to intervene' policies. Memphis police relieved two other officers of duty Monday and say the department is still investigating what happened.

A cave in Banff National Park has been recognized as a globally significant location thanks to a tiny creature found inside.