No connection between 2 knifepoint robberies in 2 days at Island gas stations, police say 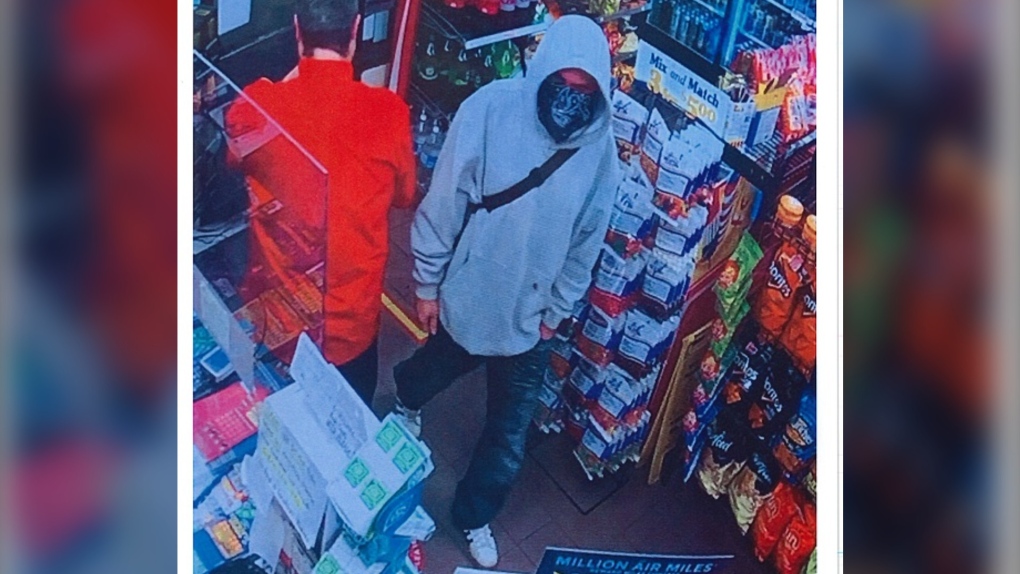 The suspect in a robbery at a gas station in the village of French Creek is seen in this image provided by Oceanside RCMP.

Police north of Nanaimo are asking the public for help identifying a man suspected of robbing a gas station in the village of French Creek earlier this week, while police in Saanich say they have a suspect in a similar - but unrelated - incident in custody.

The incident happened shortly before 7 p.m. on Thursday, Dec. 2, at a Shell gas station in the 800-block of Island Highway West, according to a news release from Oceanside RCMP.

Police said a masked man "entered the store, produced a knife and demanded cash from the clerk."

The suspect fled on foot, but officers were unable to find him, despite help from a police dog and forensic services.

No one was injured in the incident, but police said the clerk was "understandably shaken up" by the robbery.

Police released a surveillance image of the suspect, describing him as a white man wearing blue jeans, a light grey Carhartt hooded sweatshirt with the brand's name on the left sleeve, "white runners with two dark stripes on either side and a dark blue balaclava with white graphics."

He stands approximately 5'11" tall and was carrying a "light-and-dark-blue" Nike bag on his back, police said.

Oceanside RCMP are asking anyone who recognizes the suspect or has dash cam video from the area around the time the robbery took place to contact them at 250-248-6111 and quote file number 2021-12702.

NO EVIDENCE OF CONNECTION TO SAANICH INCIDENT, POLICE SAY

The French Creek incident has some similarities to another gas station robbery that took place in Saanich the following day.

According to a news release from the Saanich Police Department, a man entered the store at the corner of Burnside Road West and Harriet Road around 3 p.m. Friday. He produced a knife and demanded money from the cashier.

Saanich police said he left with "an undisclosed amount of cash" and was seen driving away in a red Hyundai Kona on Burnside Road West.

Police said the Hyundai had been reported stolen in Nanaimo earlier in the day, and asked the public to be on the lookout for the vehicle and the suspect.

On Saturday, Saanich police confirmed to CTV News that the vehicle and the suspect had been taken into custody, and said there does not appear to be any connection to the French Creek robbery.

Similarly, Oceanside RCMP said although their investigation is in its early stages, they have no information linking the Saanich robbery to their file.