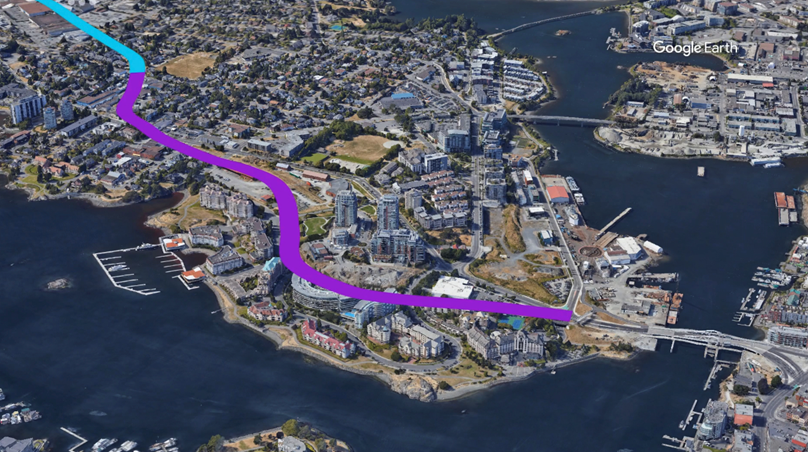 The route for the fourth phase of the E&N Rail Trail is noted in purple: (CTV News / Google Earth)
VICTORIA -

The Capital Regional District (CRD), in partnership with the City of Victoria, will begin work on the E&N Rail Trail that will connect Esquimalt, View Royal and Langford with Victoria's downtown core next year.

Measuring just under one kilometre, the new stretch of trail will run from the intersection of Esquimalt Road and Robert Street to the Harbour Road overpass of the Galloping Goose Trail.

The pedestrian and cyclist trail will wind its way through the Vic West community beside the tracks of the former E&N rail line.

"It’ll create a separated improved area to transition off the trail, and it will detour pedestrians and cyclists down through Kitma Road," said CRD Parks and Trails committee chair Rebecca Mersereau.

"It will create a much safer passage for them to get across the Johnson Street Bridge," she said.

Mersereau says the CRD is about to begin the procurement stage of the project to complete the fourth phase of the E&N Rail Trail. The estimated cost of the project is $1.5 million, which includes a $500,000 grant from the B.C. Government.

"We’re excited to have the network completed, particularly for riders who might start their journey in Langford or View Royal and want to make a safe journey downtown," said Mersereau.

"We’ve seen significant growth in trail use and it's clear that there are more diverse trail users out there."

AN ALTERNATIVE TO VEHICLES

Mersereau says the finished Vic West section of the E&N Rail Trail will let users connect to other regional trails, such as the Lochside Trail, by connecting to the Galloping Goose Trail on the western side of the Johnson Street Bridge.

"This is about enabling more people to have opportunities to recreate and to transport themselves around the region in a more sustainable way," said Mersereau.

"When we think about our region and some of the congestion issues – and we know that over half the greenhouse gas emissions come from transportation – a big part of (changing) that is giving people alternatives to getting around in their vehicles," she said. "We can do that by creating this network where you have this 'off-road' facility where you can get around surprisingly quickly when you don’t have traffic lights."

The trail currently follows the former E&N rail line through the communities of Esquimalt, View Royal, Colwood and Langford. The 13-kilometre pedestrian and cycling trail begins at Jacklin Road in Langford and currently ends at Esquimalt Road at Robert Street in Vic West.

Mersereau expects that the Vic West section of the E&N Rail Trail will be completed before the end of 2022.