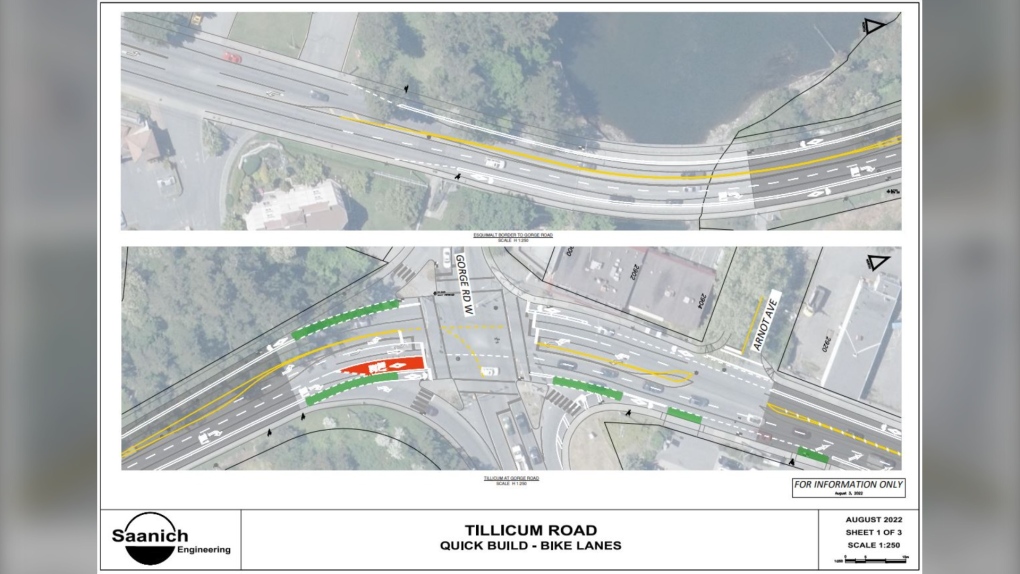 A rendering of the bike lanes is shown. (District of Saanich)

The District of Saanich is removing car lanes and replacing them with protected bike lanes along a stretch of Tillicum Road near the border with Esquimalt, B.C.

The district says it will remove two general road lanes to make room for the protected bike lanes.

Two general-purpose lanes and one left-turning lane will remain along this stretch of Tillicum Road, according to the municipality.

"We know improving conditions for pedestrians and cyclists on Tillicum will address an important gap in safe infrastructure and help enable residents to have multiple transportation options," said Rebecca Mersereau, Saanich councillor and chair of its active transportation committee.

Construction of the new bike lanes is slated for early August. Once complete, the district will monitor traffic patterns and adjust traffic signals if needed.

Meanwhile, Saanich is working on the second phase of its "Shelbourne Street Improvements Project," which includes above ground and underground upgrades to Shelbourne Street between Pear Street and North Dairy Road.

Some of these improvements include "separated bike lanes," improved biking and walking paths to the University of Victoria, and the replacement of many sewer, storm, and water systems.

The Conservatives are calling on the federal government to allow the importation and sale of foreign language-labelled versions of the same formulations of over-the-counter paediatric pain medication, in response to an ongoing nationwide shortage.

The federal government is asking a judge to dismiss a proposed class-action lawsuit brought forward by a group of Black public servants, who allege discriminatory practices within the public service.

A school board east of Toronto is apologizing after a four-year-old student walked home alone during lunchtime earlier this week.

State of emergency declared in northern N.S., thousands still without power on P.E.I.

More than 16,000 customers in Nova Scotia and Prince Edward Island are still without electricity 12 days after post-tropical storm Fiona hit the Maritimes on Sept. 23. The ongoing outages and restoration efforts have prompted the Nova Scotia government to declare a state of emergency in several counties in northern Nova Scotia.