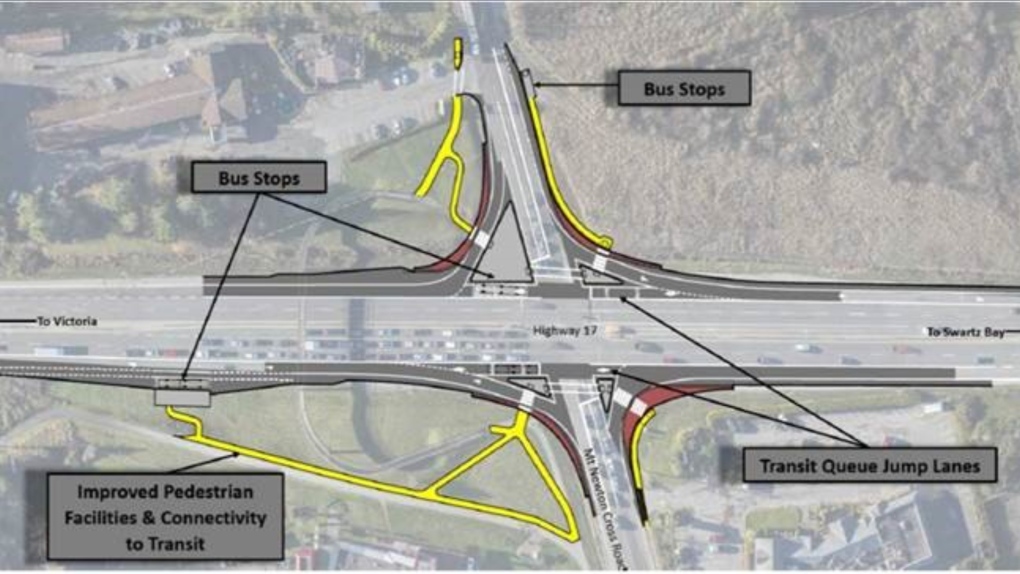 An outline of the project is shown: (Province of B.C.)

The province is adding bus lanes and new safety features to a major intersection along the Patricia Bay Highway (Highway 17) in Central Saanich.

The bus lanes will begin before the intersection to allow them to pull up to the new bus stops, then extend past the intersection, where buses will then merge back into traffic.

The province also plans to reconfigure the intersection by adding traffic islands and new signals, as well as new signage and road markings.

Construction is expected to only take place at night, according to the Ministry of Transportation.

Some highway lane closures will occur during the night work, but cycling and pedestrian trails will remain open.

The budget for the project is $7.6 million, and Nanaimo company Milestone Equipment Contracting Inc. will be handling construction.

The province says the project was identified as a priority under the South Island Transportation Strategy, which was developed by the B.C. government in consultation with local governments, Indigenous governments, transportation authorities, and other local stakeholders.

"These enhancements will make travel easier and faster for transit users and provide more safe, active transportation options for people walking and cycling along the Highway 17 corridor, benefiting businesses and connecting communities for years to come," said Transportation Minister Rob Fleming in a statement Friday.