Suites at a popular Vancouver Island resort are experiencing a record-setting year, and the guests keep on coming, including over this weekend for a national surfing championship.

"It has never been busier," said Charles McDiarmid, managing director of the Wickinnish Inn in Tofino.

"Our busiest year before this year in terms of summer and fall expectations was 2019, and we have met and even exceeded those numbers," he said.

The resort is keeping 15 of their 75 rooms offline due to the pandemic, and McDiarmid says those rooms that are open are being filled with return guests.

"Traditionally this time of year we would be welcoming a large number of international visitors – Europeans, Americans of course. That is not the case this year and pretty much 90 per cent of our visitor base is from British Columbia," McDiarmid said.

Right now, many of the area's hotels are lodging participants in the 2021 Rip Curl Pro-Nationals, a three-day surf contest featuring Junior, Open and Professional surfers.

"We weren’t able to deliver last year but thankfully under the COVID protols, outdoor sports are allowed." 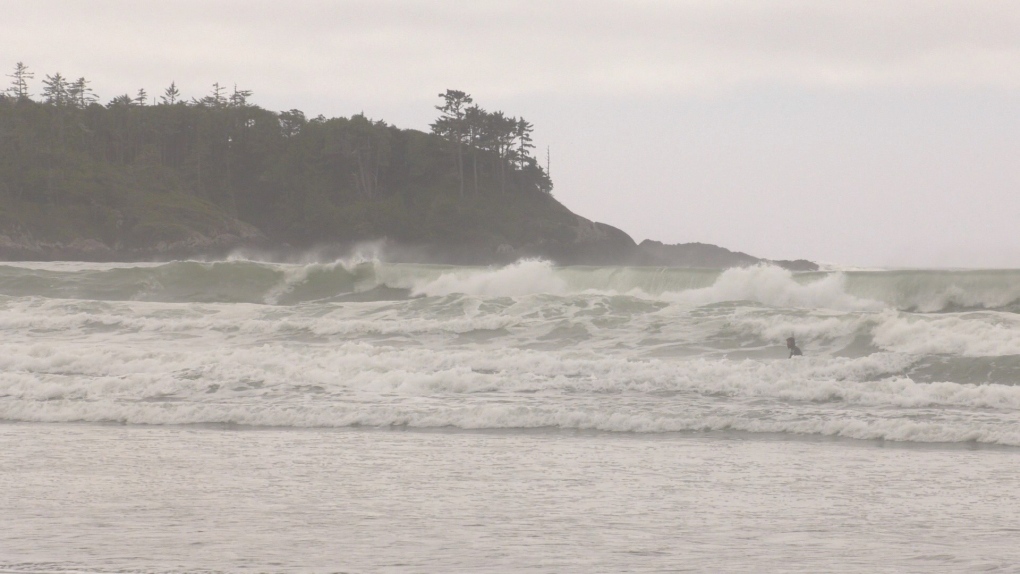 A surfer is pictured in Tofino, B.C.: (CTV News)

Domic says 90 per cent of the participants are based in the Tofino and Ucluelet region, but the rest are coming from the Lower Mainland and other parts of Canada.

"Travelling to competitions is approved," he said. "We had our COVID protocols approved, every level of government has signed off on it and we’re happy to be able to deliver in 2021. It’s something that we worked on since last year."

The event has returned to Cox Bay, and Domic says the event has come together because of tremendous community support.

"We have 160 spots available and I think there’s three remaining," he said. "There’s a real appetite, a real thirst for competition and events in general."

Domic says while setup for the event and weather have both been smooth, it hasn’t been problem free.

"Tofino is at capacity so that’s definitely been a major challenge," he said.

"Getting accommodations for staffing – we have our medical staff coming up from Vancouver and Victoria," said Domic. "But most of the surfers are from here, that’s fine, it’s just been our staffing."

Male and female surfers will be entered in Pro Shortboard, Open Shortboard, Junior U18 and Junior U16 Longboard categories competing for bragging rights as well as an $8,000 total prize purse.

Head coach Shannon Brown is overseeing many of his Surf Canada team members.

"We have athletes who are on the open team that currently competed in El Salvador, at the Olympic trials, and then we have a shortlist of alternatives as well," Brown said.

He acknowledges local entrants might have a very slight advantage over those competing from out of town.

"They all live in warmer waters so when they come put on a nice thicker wet suit and then put on booties and potentially gloves and a hood it really changes the feel that you get on your surfboard when you’re up and riding," Brown said.

Members of the public are invited to watch the competition at Cox Bay or via a live webcast here.