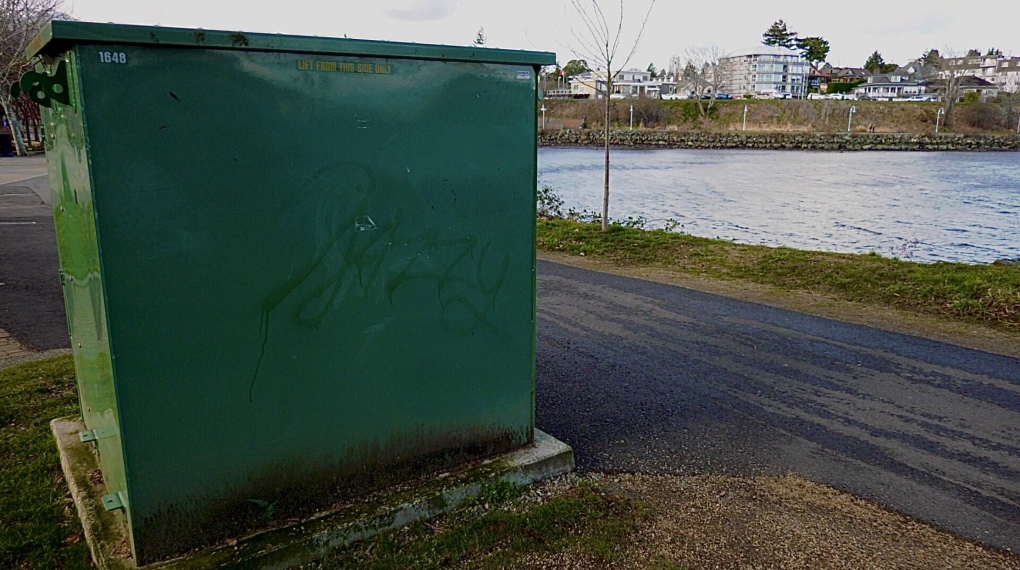 Some of the graffiti in the Maffeo Sutton Park area is shown: (CTV News)

VICTORIA -- Three taggers were caught by Nanaimo RCMP after their hands were still allegedly covered with green paint which they used to deface public property in Mid-February.

“The tags were in green paint and coincidentally the suspects had green paint all over their hands,” said Const. Gary O’Brien of the Nanaimo RCMP in a release Friday. “The evidence was fairly overwhelming.”

On Monday, Feb. 15, around 9 p.m., a witness saw three men spray-painting throughout Maffeo Sutton Park in downtown Nanaimo and reported it to police.

RCMP responded and located the three suspects close by with fresh green paint on their hands and arrested them for mischief.

Once in custody, Mounties walked the park and found several garbage cans and utility boxes had been freshly tagged with the same green paint.

The three men arrested are between the ages of 32 and 36 and have yet to be charged by police. This is because the RCMP are waiting to recommend charges until after the city reports back how much it will cost to cleanup the graffiti.

They could be facing a charge of mischief over $5,000, and a $500 fine under the public nuisance bylaw.

On Wednesday, Victoria city workers woke up to find multiple downtown buildings had been covered in spray paint that was seemingly connected to Beacon Hill Park.

Some of the messages written in the graffiti included "Stop lying," "Support Beacon Hill," and "Violator of human rights."