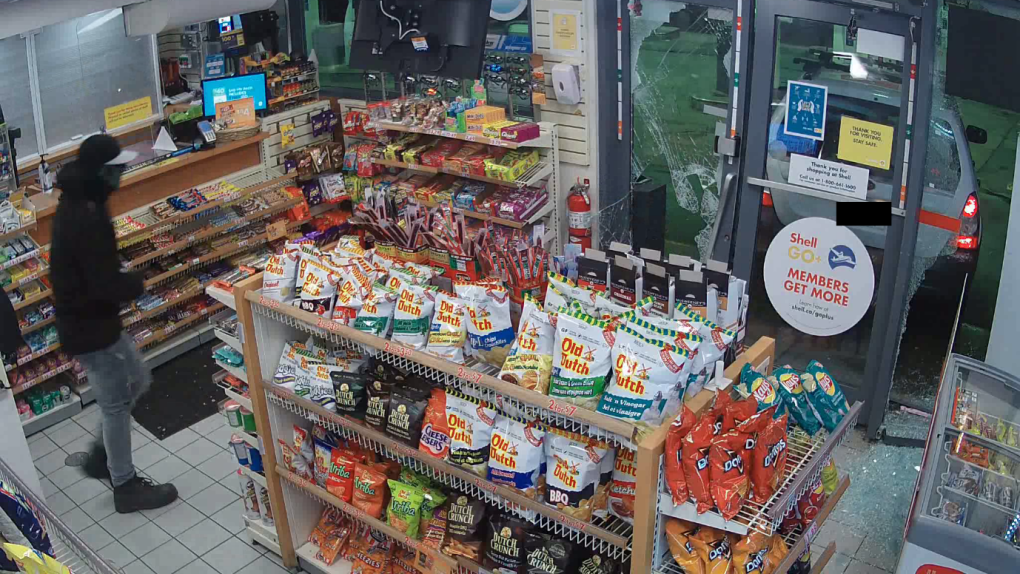 A Nanaimo, B.C., man is facing multiple charges after taking his dog along on an hours-long "crime spree" across several Vancouver Island communities, according to police.

Mounties in Nanaimo were called around 9 p.m. on March 11 after a man with a dog reportedly forced a woman out of her white Subaru SUV before stealing it.

Hours later and approximately 100 kilometres away, police in Saanich received an alarm call from a gas station in the 300-block of Burnside Road around 4 a.m.

Police arrived at the closed gas station to find evidence of a break-in, the RCMP said.

A review of surveillance video revealed that a white Subaru SUV had rammed the front doors of the business, causing an estimated $10,000 in damage, police said.

The driver was unsuccessful in his attempts to access the cash register and fled the scene, according to police.

Saanich police determined the SUV was the same vehicle reported stolen in Nanaimo the night before.

An employee told responding officers that a man entered the business with a knife and demanded cash, which he took before fleeing in a vehicle.

Surveillance video from the scene again indicated a white Subaru was involved, according to police.

Two hours later, Ladysmith RCMP officers responded to a report of a vehicle on fire on the Trans-Canada Highway.

Mounties confirmed the vehicle was the white Subaru stolen out of Nanaimo. A witness reported seeing a man with a dog fleeing from the vehicle just before it went up in flames, police said.

Forensic investigators and police dogs were deployed to the Ladysmith area to search for the perpetrator.

Police found and arrested a man walking along the highway with a dog just after 10 a.m.

A 26-year-old Nanaimo man has been charged with mischief, breaking and entering, arson, possession of stolen property and two counts of robbery, according to police.

The suspect will remain in custody until his next court date on April 21.

"The prompt, detailed information received from the public assisted the police in quickly locating and arresting the suspect," said West Shore RCMP Const. Meghan Groulx in a statement Thursday. "Thankfully, no one was injured during this short-lived crime spree."