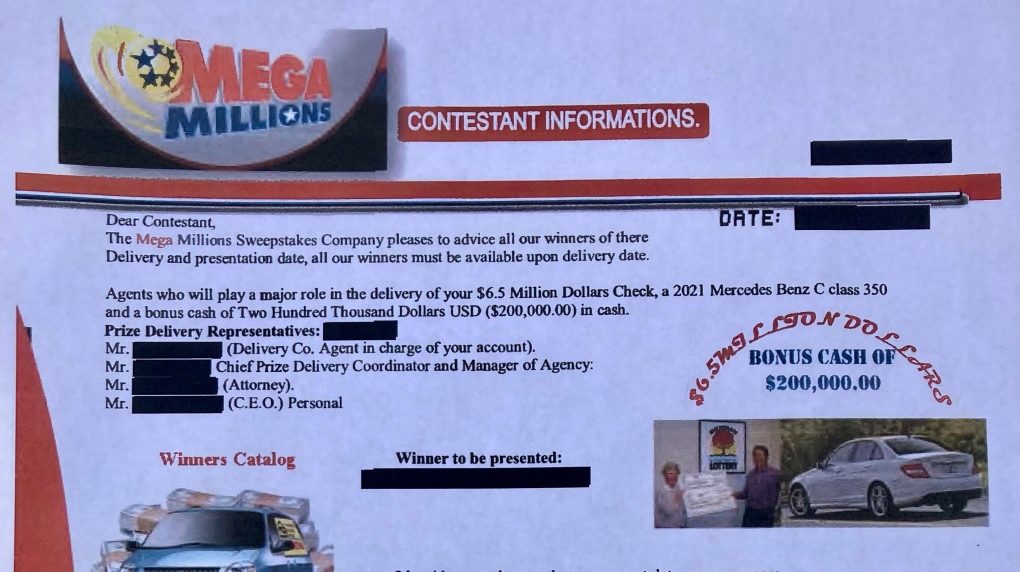 One of the letters the seniors received as part of the scam. (RCMP)

Nanaimo RCMP are cautioning residents to be on guard for potential scams after an elderly couple lost hundreds of thousands of dollars over the course of a year.

Police say the scam started in early 2021, when a fraudster called a couple in their late 80s claiming that they had won $18.5 million and a Mercedes-Benz from Reader's Digest.

The scammer said the couple would need to pay several administrative fees and taxes to accept their prize, and about a week later the couple received "official-looking documents" in the mail that appeared to be from the Internal Revenue Service.

The documents directed the couple to contact Mega Millions in order to arrange payment of taxes and fees for their prize. Then, once a week for nearly a year, the couple received a call from scammers with directions on how to make cash payments through money orders to receive their prize.

Throughout the course of the year, the couple sent bank drafts to several different addresses for a total of nearly $400,000.

"The financial loss the couple experienced is significant and is certainly one of the largest we have seen in Nanaimo," said Const. Gary O'Brien of the Nanaimo RCMP in a release Thursday.

"It also goes to shows that if fraudsters believe they have convinced you of their legitimacy, they will not stop until essentially there is no more money to give or you figure out it is a scam," he said.

Mounties are encouraging residents to check out the Canadian Anti-Fraud Centre for tips on how to spot and protect yourself from fraud.

Throughout 2021, 67,533 Canadians reported being victims of fraud, totaling roughly $380 million in losses, according to the Canadian Anti-Fraud Centre.