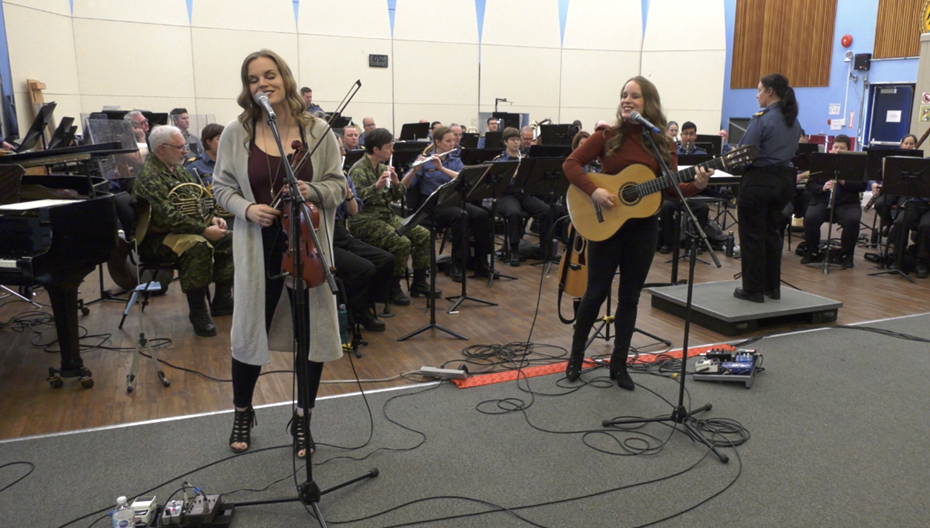 Performing duo Twin Kennedy rehearses with the Naden Band of the RCN as seen on Dec. 3, 2021. (CTV News)

The Naden Band of the Royal Canadian Navy (RCN) Christmas concerts are back this year with two live performances in support of the Salvation Army’s annual toy drive.

In December 2020, the Naden Band was forced to take its holiday concert series online due to the COVID-19 pandemic. This year, the full, 35-member Navy Band have two performances of seasonal favourites in front of a live audience at Victoria’s Royal Theatre.

“We’re so excited to finally be back doing live performances supporting the base, and also connecting with the community again,” said Naden Band of the RCN Commanding Officer Lt. Catherine Norris.

“When you are actually at the concerts and you see the mountains of toys that are generated through these concerts and you realize each toy will be going to a child that might not (otherwise) get a toy this Christmas, I think that has a huge impact.”

The Naden Band is marking 43 years of support of the Salvation Army toy drive with this year’s holiday concert series. Norris says it is one of the band’s most highly anticipated performances of the year.

“This concert is normally a big kick-off for the holiday season,” said Norris. “It starts to get everyone in the mood for the holidays and it’s also for such a good cause.”

The Naden Band will be joined by Victoria musical guests “Twin Kennedy.” Carli and Julie Kennedy promise to bring the sounds of a “down home country” Christmas to the concert with a selection of favourite and original seasonal songs.

“You’re going to hear Silver Bells and a song called Cold Weather and many other favourites,” said guitarist and singer Carli Kennedy. “We’re so happy to be home in Victoria for the holidays and being a part of this incredible concert.”

“We know that this concert is going to be such a special night not because we’re surrounded by the incredible musicians of the Naden Band, but also because we’re supporting the Salvation Army’s toy drive,” said singer and fiddle player Julie Kennedy. “Playing wth the Naden Band is a dream come true.”

The holiday performances at the Royal Theatre begin at 7:30 p.m. on Dec. 6 and 7. The concerts will include a varied program of holiday and seasonal music featuring the Concert Band, the Pacific Blue Big Band and Naden Band soloists, in addition to the Christmas program by Twin Kennedy.

“We hope that people walk away entertained and in a festive mood,” said Norris. “We also hope they walk away with a sense of community and coming together and that all kids will get a visit from Santa Claus and get something this year.”

Admission for the Naden Band holiday concerts is $12 with an unwrapped toy. Tickets are available at the McPherson Box Office on Pandora Avenue or can be charged by phone at 250-386-6121, or toll-free at 1-888-717-9121. They can also be purchased online.