A campaign is underway in Greater Victoria called What the Hell, Let's Fill the Limo which aims to stuff a stretch limo with non-perishable food items and toys for those in need this holiday season.

Donated food will benefit the Shelbourne Community Kitchen and toys will go to CFAX’s Santas Anonymous.

"It’s a way to give back," said Burghardt.

"I met Howie though his Facebook page and what he does for the community, and a few years ago we decided to work together and give back and do as much as we can," he said.

This is the third year in a row the duo have worked together to help those in need during the holiday season.

"I’m pretty excited. I always am when it comes to giving and helping people out," said Allan. "I love it."

"It’s just something I wish everybody would get involved with, helping the community out," he said.

The event happens this Saturday, Dec. 10 between 11 a.m. and 3 p.m. at the Tim Hortons located at the corner of Cedar Hill Cross Road and Shelbourne Street.

The Shelbourne Community Kitchen, located in Saanich, works to lower barriers to healthy food for more than 940 families and individuals living on low income in the community.

People come to the kitchen to learn food growing skills, prepare and share healthy meals together in its Food Skills Programs, and access nutritious food through its Pantry Program.

Anyone who donates to the Fill the Limo campaign will also be entered into a draw for several prizes, including a new 50-inch TV, a night's stay at Moon Lodge on the Malahat, and four chances to win tickets for two for a limo tour of Christmas lights around the city with Howie Allan himself. 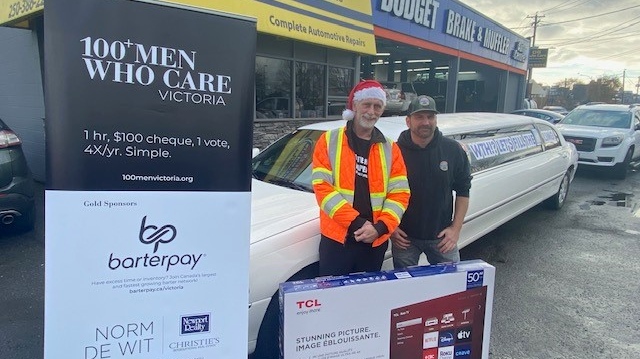 "We’re going to park out front of Tim Hortons on Shelbourne," said Burghardt. "We’re going to stick Howie in there and have people come by and fill it up – and he’s not leaving until it’s done!"

If you can’t make it this weekend, you can drop off donations at Budget Brake & Muffler Auto Centre at the corner of Bay at Douglas streets for the rest of this week into Monday. You can also sign up for the prize draw while you are there. 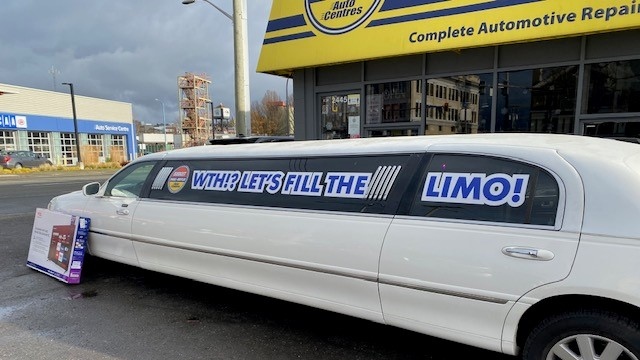