The B.C. government has released its business case to redevelop the Royal B.C. Museum, after the province faced criticism for its $789-million cost estimate.

The NDP government says the funds are required because the current museum, about 55 years old, is not seismically safe or accessible, and because many of its facilities, like the loading bay, elevator, and entrance, are too small for some exhibits.

Project leads noted that for several exhibits, museum staff had to remove walls and windows in order to transport larger items into the museum.

Project leads also note that every time windows or walls need to be removed, staff have to monitor for hazardous materials that were part of the building's initial construction, like asbestos or mercury.

Much of the project funding will go towards design and construction contracts for the new Royal B.C. Museum.

Out of the estimated $789.5 million price tag, some $550 million is for construction, while the remaining $239.5 million will go towards things like project management, abatement and demolition, gallery fit out and contingency funds.

Project leads note that full hazmat gear will be required to safely demolish some portions of the building.

It's expected to take about two and a half years for deconstruction and the safe removal of hazardous materials from the property, which will start after the museum has been emptied of its more than seven million artifacts. 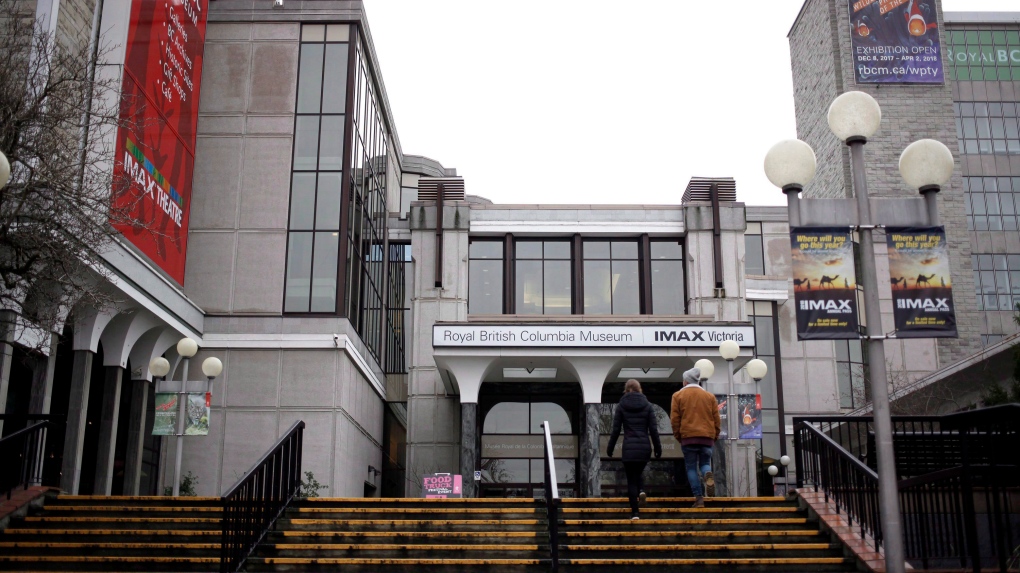 People walk up stairs to the entrance of the Royal BC Museum in Victoria, B.C., on Thursday, December 21, 2017. (THE CANADIAN PRESS / Chad Hipolito)

Project leads say that it would have been more costly and more time consuming to renovate the space while also keeping the museum open, rather than demolishing the buildings and constructing a new museum on the same site in downtown Victoria.

The province notes that during the development of the business case it did not review the costs or time required to close down the museum to complete renovations.

The current RBCM is set to close in September, with the new museum opening to guests in 2030.

In the short term, the province will complete packing and transferring its collections to a temporary storage site in Saanich, B.C.

The province will also seek requests for proposals from developers, engineers and designers.

The three most qualified teams will compete to have their designs chosen for the $550-million construction and design contracts, according to province.

Project leads say there's a strong focus on making sure the new museum is a world-class facility that's about 26 per cent larger than the current museum buildings.

U.S. President Joe Biden on Saturday signed the most sweeping gun violence bill in decades, a bipartisan compromise that seemed unimaginable until a recent series of mass shootings, including the massacre of 19 students and two teachers at a Texas elementary school.

They are the most fiercely polarizing issues in American life: abortion and guns. And two momentous decisions by the Supreme Court in two days have done anything but resolve them, firing up debate about whether the court's Conservative justices are being faithful and consistent to history and the Constitution – or citing them to justify political preferences.

Abortion is legal in Canada -- but is it accessible? Experts weigh in

There is a renewed conversation about abortion accessibility and rights for women in Canada after U.S. Supreme Court justices overturned the Roe v. Wade case on Friday, allowing states to ban abortions.

Russian forces were trying to block a city in eastern Ukraine, the region's governor said Saturday, after a relentless assault on a neighboring city forced Ukrainian troops to begin withdrawing after weeks of intense fighting.

Man arrested after four people violently attacked by his dog in Toronto: police

A suspect has been arrested after he and his 100-pound dog allegedly attacked four people overnight, Toronto police say.