Heavy rainfall will continue to batter regions of Vancouver Island on Tuesday, increasing the risk of small avalanches in some areas, according to Avalanche Canada.

According to Environment Canada, rainfall will be especially noticeable on the island's west coast moving north from Tofino, including the communities of Zeballos and Tahsis.

"This is the third of three potent atmospheric rivers to arrive on our coast in a week," said Environment Canada meteorologist, Armel Castellan, at a live update Tuesday morning.

"It will continue overnight into tomorrow evening. There will be some lulls but we do expect some high (totals), 100 millimetres in Bella Coola – 150, even, on the west coast of Vancouver Island," he said.

On Tuesday morning, crews worked to clear a landslide near Port Hardy on the north end of the island.

The landslide was located on Holberg Road and was mostly cleared by 11 a.m., with traffic flowing through the area. 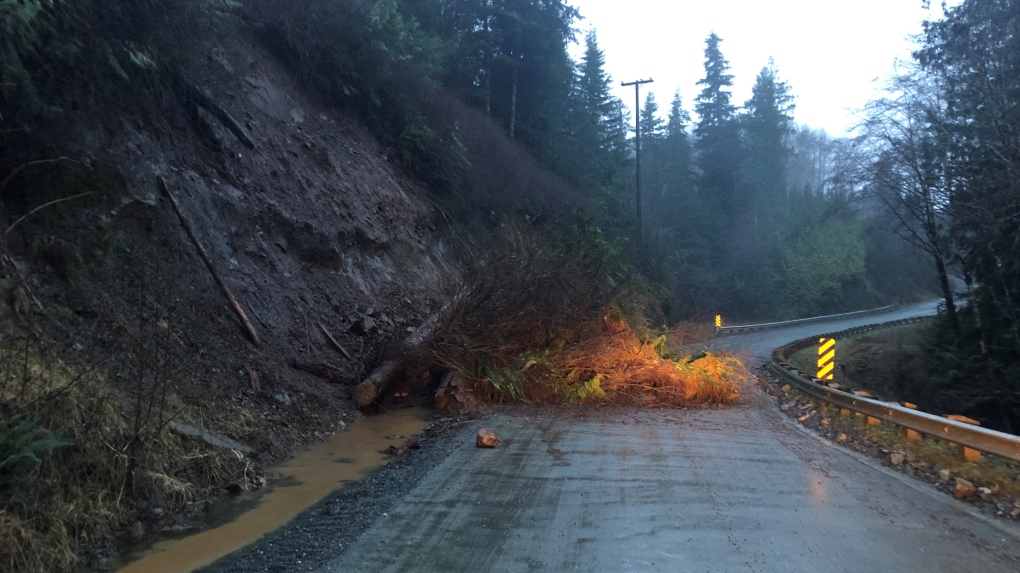 The landslide on Holberg Road near Port Hardy, B.C. is shown: Nov. 30, 2021 (Ministry of Transportation)

The heavy rainfall Tuesday, combined with fresh snowfall on Monday, has led to dangerous avalanche conditions on Vancouver Island, according to Avalanche Canada.

"New snow followed by a deluge of rain will breathe new life into wet loose avalanche problems on Tuesday," reads an update from Avalanche Canada on Monday.

"The more new snow has accumulated before the transition to rain occurs, the greater the danger will be."

Castellan says that water levels will be impacted by both rain and snow runoff on Tuesday.

"Snowmelt is also a component of this event and will add to the rain totals in creeks and rivers," he said.

Flood watches are in effect for all of Vancouver Island, meaning river levels could meet or exceed their banks.

During flood watches, "flooding of areas adjacent to affected rivers may occur," according to the B.C. River Forecast Centre.

Environment Canada estimates that rainfall should ease Thursday before a smaller system returns to the coast Friday evening.

"We will be keeping a close eye on the barrage of storms (headed to B.C.)," said Castellan.