After sitting on standby for several days, the huge Martin Mars water bomber has seen action dousing another wildfire -- only its second call this month.

The big plane was dispatched to a four hectare fire near Cowichan Lake, at Skutz Falls.

The human-caused blaze is not threatening any homes.

Officials ordered the Martin-Mars out of mothballs earlier this month as wildfires flared across southern B.C., but the decision has been criticized because of the $15,000 daily standby fees for the aircraft -- which can only be used in very specific cases. 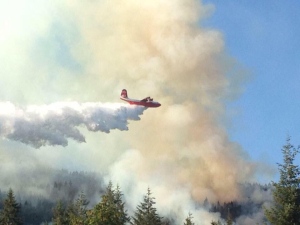