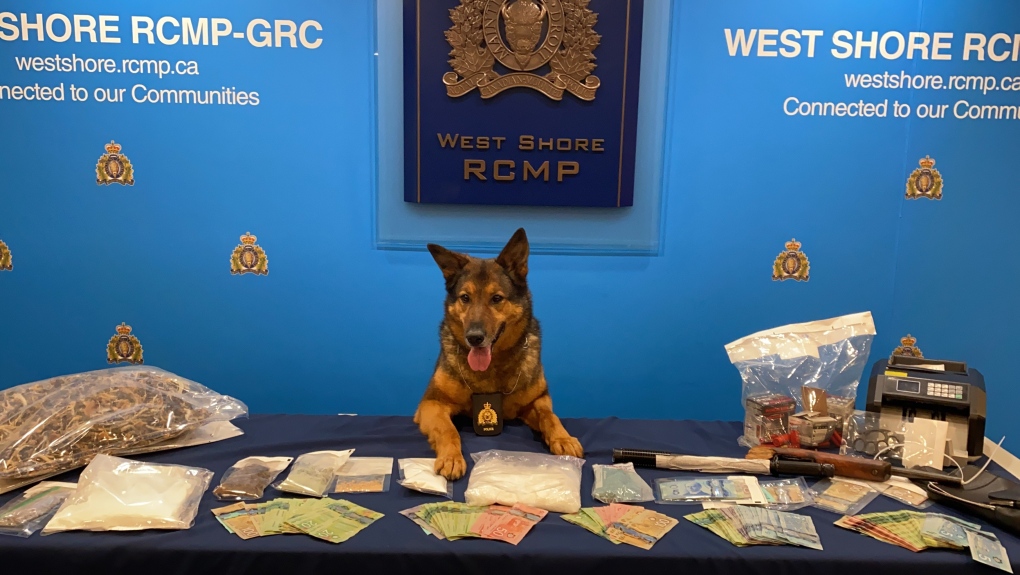 Police dog Erik is pictured with some of the items seized during the three raids: (West Shore RCMP)

VICTORIA -- RCMP say they have arrested three people and uncovered signs of a drug-trafficking network on the West Shore, following a raid of three homes in late February.

Police say that a two-month investigation came to a head on Feb. 26 when officers from the West Shore RCMP and the Combined Force Special Enforcement Unit of British Columbia executed three simultaneous search warrants at homes in Langford, Colwood and Sooke.

At the homes, police say they found "substantial quantities of drugs," weapons and signs of an organized drug-trafficking network that spanned the West Shore and areas of the Capital Regional District.

A loaded shotgun, two loaded pistol magazines, other firearms ammunition and 11 ounces of suspected fentanyl was also seized by police.

A complete list of the items seized by police can be found below:

"Numerous resources as well as a variety of covert investigative techniques were utilized during this investigation," said Const. Alex Bérubé of the West Shore RCMP in a release Tuesday.

"The disruption of such a drug trafficking operation is key to keeping our communities safe," he said.

Police say the investigation is ongoing and a "detailed report" of recommend charges is being prepared for Crown counsel.