Man who gloated about Victoria weather not backing down after snowfall

It is, admittedly, not something you see every day: a man using his lawnmower to clear the snow from his front yard in Saanich.

To explain why Daniel Smith is marching back and forth in his "winter boots" i.e. running shoes, with a lawnmower, we need to backtrack to January.

That’s when Ontario was stuck in the cross hairs of a polar vortex, while in Victoria the sun was shining and cherry blossoms blooming.

In an inspired bout of good-natured teasing, Smith made a couple of videos for family in Ontario, hoping to provoke his brother-in-law Mike in particular.

Smith piled on his mittens and toque, and already getting overheated, talked into the camera.

"Just wanted to show everybody what it’s like to shovel snow in Victoria, B.C. in January," he explained, before panning down to his lawnmower and the very green grass.

Then the camera goes back to his face as he drives the point home.

That was in addition to another video in which he “complained” about having to mow the lawn year-round.

He was a hit online, with the video snowballing and even inspiring other, similar videos.

But since the weather turned cold in Victoria, so have his fans, blaming Smith for goading Mother Nature into sending winter this way.

"The hate mail, it’s all my fault. It’s not my fault. I blame it all on my brother-in-law and I’m sticking to that," said Smith with a laugh.

His wants to direct the icy stares and cold shoulders to Mike, the aforementioned brother-in-law.

Smith was expecting a rebuttal video.

“I’m still waiting for that video,” he said.

No matter how cold it gets, Smith refuses to eat his words, saying it’s still better than the rest of the country, now poking fun at west coasters dealing with snow.

“I’m actually shocked the town is not shut down from the amount we got,” he said, gesturing toward a light dusting of flakes, already starting to melt.

In his own quiet way though, Mike seems to have gotten the last word.

Smith received a photo of Mike, looking distressed (or at least thoughtful), with a caption underneath. 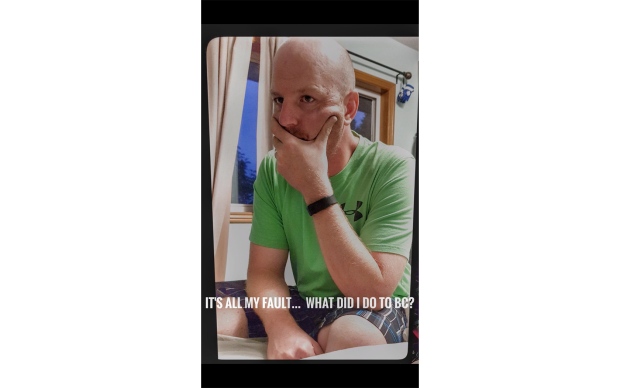