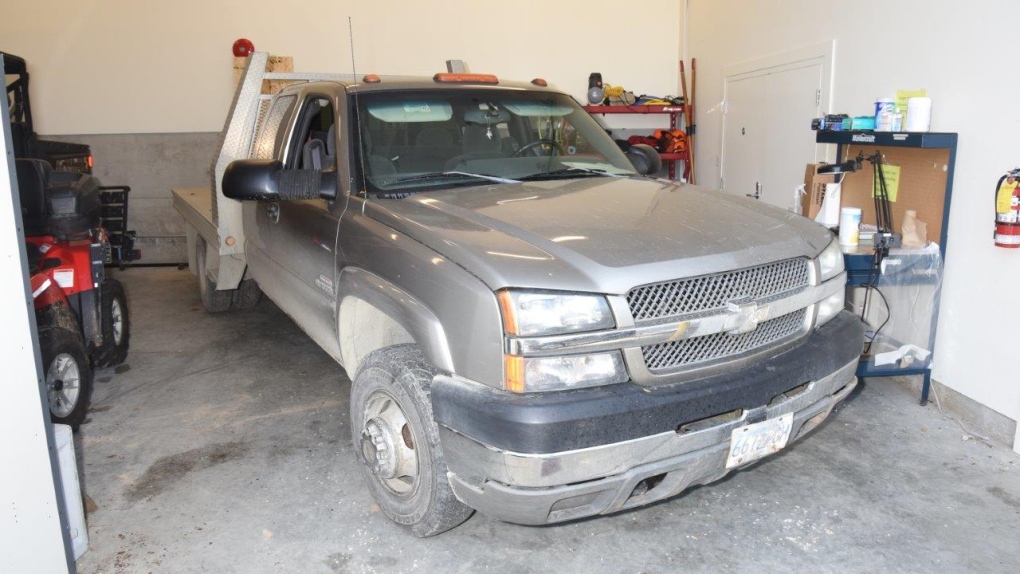 The stolen truck is shown: (BC RCMP)

VANCOUVER -- Mounties in several jurisdictions on Vancouver Island are looking for a man suspected of a string of thefts and break-ins that have taken place over the last two weeks.

The series of incidents began in Deep Bay on June 11, according to a news release from Oceanside RCMP, the detachment that serves Parksville and several other communities north of Nanaimo.

Around 6 p.m. that day, a tan Chevy Silverado pickup truck was stolen from the 300 block of Crome Point Road in Deep Bay, according to police, who added that theft wasn't reported until the following day.

In the meantime, just before 8 p.m. on June 11, police received a report of a break-in at a paint store in Qualicum Beach. The truck seen leaving the scene matches the description of the one that had been stolen, police said.

On June 15, Ladysmith RCMP received a report of a hit-and-run crash at a local hardware store. The collision happened just after 11 a.m. and damaged two vehicles, and RCMP say the truck involved in the crash again matched the description of the one that had been stolen in Deep Bay.

Also on June 15, North Cowichan RCMP received a report of a theft from a vehicle in a parking lot in the 2800 block of Mill Street in Chemainus. One of the items stolen was a credit card, which was used at a gas station in the village, police said.

Finally, on June 16, a Lake Cowichan RCMP officer spotted the truck in the 10000 block of Youbou Road in Youbou. The officer noticed that the truck's licence plate was partially obscured by spray paint, which was suspicious, police said.

After checking on the truck and learning it was stolen, the officer attempted to arrest the man by entering the passenger side of the truck. The man evaded the officer and fled on foot, according to RCMP.

A police service dog was called in to help track the man in the forest he had run into, but officers were unable to find him.

Police describe the suspect as a white man with a thin build and short hair. He stands roughly 5'8" tall and was last seen wearing a green Element t-shirt, camouflage-coloured shorts, black socks, white running shoes, a Hockey Canada baseball cap, a bandana over his face and aviator sunglasses.

Anyone who has information about any of the incidents or can help police identify the man should call the Oceanside RCMP detachment at 250-248-6111, police said.