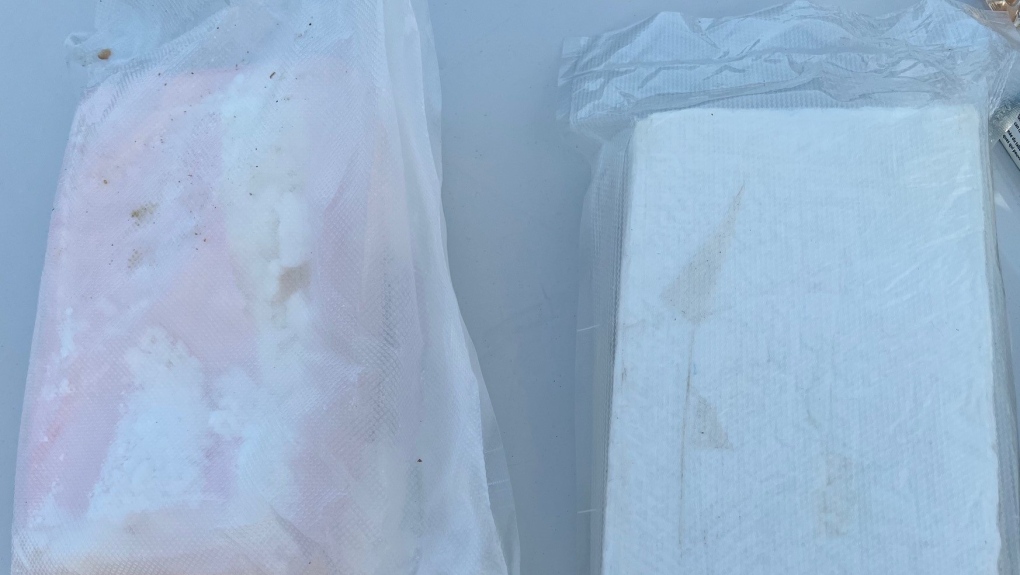 The two bricks of cocaine weighed about 2 kilograms in total. (Nanaimo RCMP)

A Nanaimo man has been charged with one count of possessing illicit substances for the purpose of trafficking after he was involved in a rollover crash earlier this year.

Nanaimo RCMP say they were called to the intersection of Estevan Road and Departure Bay Road around 7:45 p.m. on April 16 for reports of a rollover crash.

Mounties say multiple witnesses called police to report the crash, and said that the driver of the vehicle crawled out of the crashed car and fled the area on foot.

"Officers initially detained the driver for impaired driving by alcohol, however their focus quickly diverted after noting that he was literally holding in his hands two bricks of suspected cocaine," said Nanaimo RCMP in a release Tuesday.

Mounties say the two bricks of cocaine weighed about two kilograms in total.

The driver, 43-year-old Nicholas Harris, was arrested and released later that day with a court date scheduled for June 10.

His vehicle, a newer model black Jaguar convertible, was also seized by police at the time.

On Tuesday, Mounties said Harris appeared in court on June 10, when one count of possession for the purpose of trafficking was sworn in. His next court date is scheduled for late August, poliec say.

"The officers who located the suspect were gobsmacked to find the suspect with such a large quantity of illegal drugs," said Const. Gary O’Brien of the Nanaimo RCMP in a statement Tuesday.

"The officers would also like to extend their sincere appreciation to the bystanders who assisted officers by staying at the scene and provided real-time updates which allowed investigators to locate the suspect quickly and efficiently, before he had the opportunity to hide or destroy the drugs," he said.

The FBI's unprecedented search of former U.S. President Donald Trump's Florida residence ricocheted around government, politics and a polarized country Tuesday along with questions as to why the Justice Department -- notably cautious under Attorney General Merrick Garland -- decided to take such a drastic step.

Experts voice privacy concerns over RCMP's use of 'intrusive' spyware

Tracking active wildfires around the world

For the first time in eight years, Canadian warships are not involved in either of two NATO naval task forces charged with patrolling European waters and defending against Russian threats.

Grand jury declines to indict woman in Emmett Till killing

A Mississippi grand jury has declined to indict the white woman whose accusation set off the lynching of Black teenager Emmett Till nearly 70 years ago, most likely closing the case that shocked a nation and galvanized the modern civil rights movement.

opinion | Tom Mulcair: Why Pierre Poilievre's plan to work with provinces to reduce barriers is a good idea

The serious shortage of nurses and doctors has put the spotlight on a long overdue reform to the rules governing entrance requirements for foreign-trained professionals, says former NDP leader Tom Mulcair in an exclusive column for CTVNews.ca.

Nova Scotia removes some restrictions for medical assistance in dying

Nova Scotia is removing the requirement that someone's natural death be "reasonably foreseeable" before they can access medical assistance in dying.