A crash involving a logging truck near Courtenay, B.C., on Tuesday claimed the life of one man, CTV News has learned.

Pamela Tessman was driving near the intersection of the Comox Valley Parkway and the northbound onramp onto Highway 19 just moments after a load of logs fell off a truck, crushing a nearby pickup.

The logging truck had been turning left onto the onramp when it came upon a pickup parked at the side of the road.

While turning, the logs spilled off the truck, crushing a 43-year-old man who was beside the pickup.

"As I was doing that the logging truck driver got out of his truck and went to see what was happening," she said. 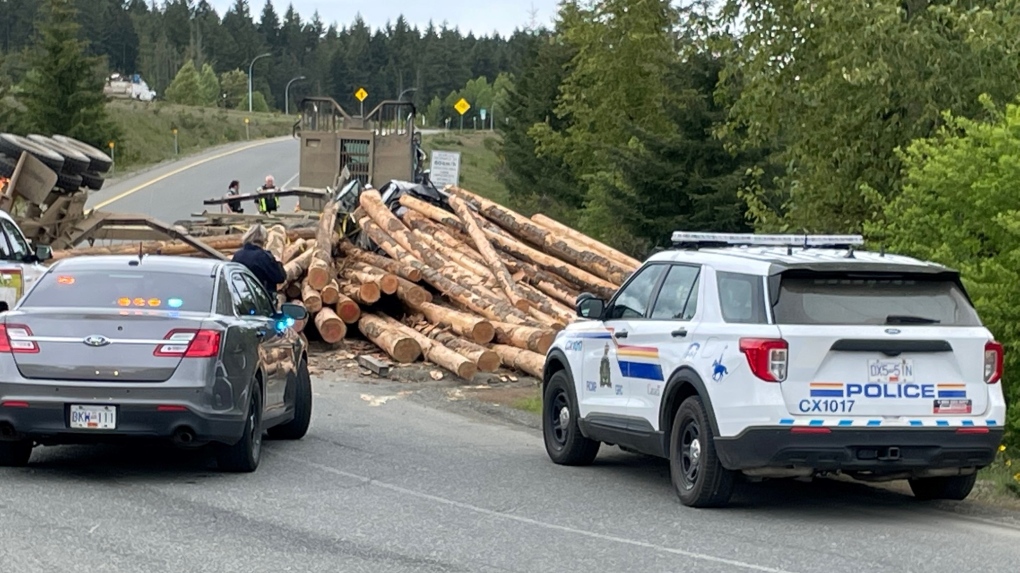 The crash closed the northbound onramp onto Highway 19 from Comox Valley Parkway on Tuesday. (CTV News)

A woman was also standing beside the pickup truck on the front passenger side with the truck's door open.

The woman did suffer a shoulder injury and was trapped inside the truck.

"She started screaming and asking someone to help her," said Tessman.

Firefighters later extracted the woman from the vehicle.

"Normally when you come upon accidents you see the police have already arrived," said Tessman. "So to be the first one at the scene was really surreal."

The fire chief added that logging trucks have had crashes at this corner before, though it is a rare occurrence.

A commercial vehicle inspector and a forestry worker were at the scene of the crash Wednesday.

The logging truck involved in the crash was owned and operated by a company out of Burns Lake, B.C., and was working under contract for Mosaic Forest Management.

Mosaic said it suspended all operations on Wednesday out of respect for everyone involved.

The company added that it was deeply saddened by the crash and that it was sending its sincere condolences to everyone affected.

"I can tell you the 43-year-old man who was found deceased at the scene was from Lake Cowichan," said Const. Monka Terragni of the Comox Valley RCMP.

His identity has not been released.