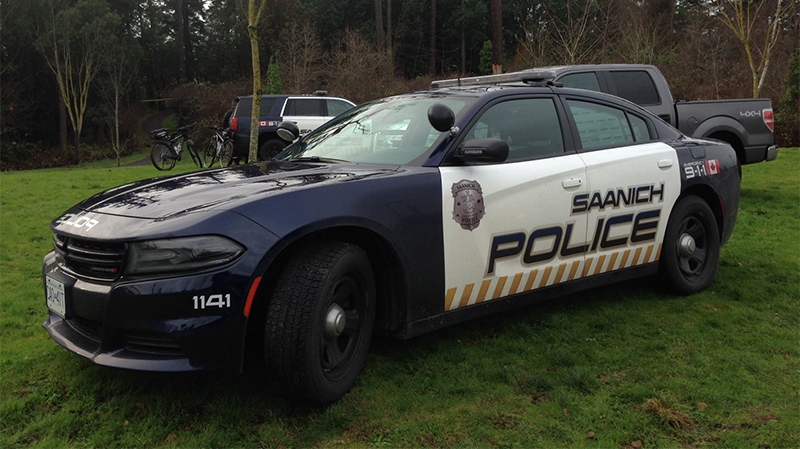 Saanich police say a man was arrested Thursday morning after he allegedly bit a worker at a liquor store and threatened staff members with a knife.

The incident was reported around 9 a.m., when a caller told police that a man was "chasing the staff with a knife" at the store in the 3200-block of Shelbourne Street.

Police were later told that the man became aggressive after he was asked by store staff to leave.

The man then began assaulting one employee, prompting another worker to intervene. The man then bit the second employee and pulled out a knife, according to Saanich police.

After the man brandished the knife, he reportedly threatened the staff members before leaving the store.

The employee who was bitten was taken to hospital for non-life-threatening injuries on their arm. The other employee was looked over by paramedics at the scene, police say.

Once officers arrived, they found the suspect hiding in some nearby bushes, with the help of a police dog. Police also say they found a discarded knife in the area.

The suspect, a 35-year-old man, is reportedly known to police and is facing charges of assault causing bodily harm, possession of a weapon, and breaching conditions not to possess weapons.

Crown counsel is seeking to revoke the prior order that granted bail for Tamara Lich, an organizer of the 'Freedom Convoy,' and says he will argue for her to be detained.

The gunman who attacked an Independence Day parade in suburban Chicago fired more than 70 rounds with an AR-15-style gun that killed at least six people, then evaded initial capture by dressing as a woman and blending into the fleeing crowd, police said Tuesday.

The Bank of Canada's strategy of rapidly increasing its key interest rate in an effort to tackle skyrocketing inflation will likely trigger a recession, a new study from the Canadian Centre for Policy Alternatives (CCPA) says.

Dressed in Indigenous regalia, National Chief RoseAnne Archibald strode into the annual Assembly of First Nations gathering in Vancouver ahead of a group of chanting supporters on Tuesday. Just the day before, Archibald said she had been 'erased' from the agenda after her suspension in June. Instead, she led opening ceremonies and welcomed attendees in her opening address.