A Texas man is in hospital after he lost an eye in a hiking injury on the West Coast Trail on Vancouver Island, B.C.

Edward Steinkamp was hiking the trail with his son on May 3 when he fell and had a branch pierce through his eye and partially into his brain.

Steinkamp was airlifted to hospital for what Parks Canada described as "serious injuries" at the time, though the organization noted that the man was in "stable condition." 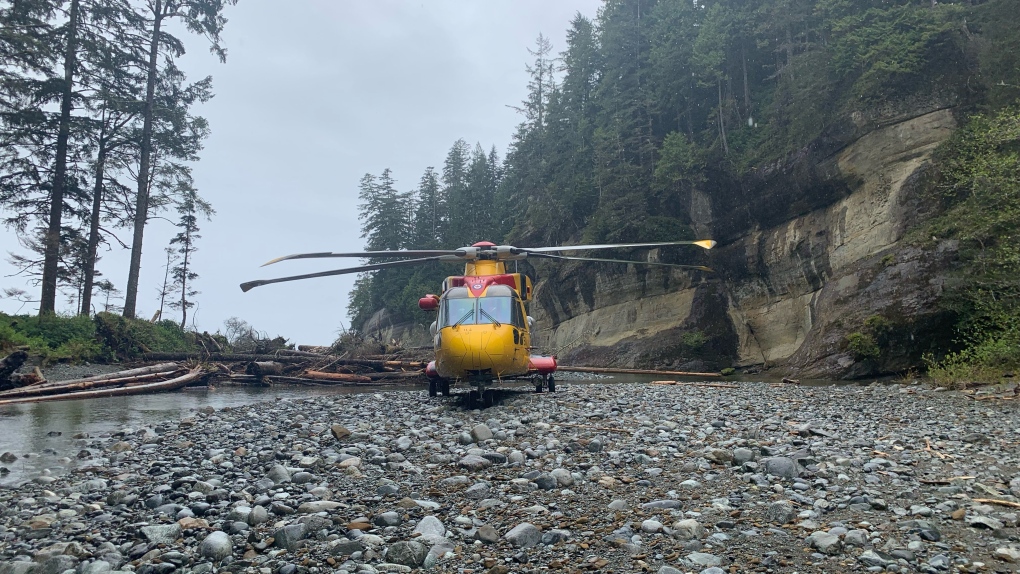 A rescue helicopter is pictured on the West Coast Trail. (MARPAC)

On Friday, a family member said Steinkamp had lost his eye because of the injury and the branch had penetrated his frontal lobe.

"The surgeon said, 'You're lucky to be alive, you've got this branch in your brain," said the hiker's brother, Peter Steinkamp.

He's set to undergo further surgery due to an infection on Friday.

"It looks like he lost one eye because when he fell on the branch it severed an optic nerve," said the man's brother.

"They removed it but now they're looking at some infections," he said.

An online fundraiser has been set up to support the hiker's family. Steinkamp's older brother says there's been insurance challenges since the U.S. man was in Canada, and adds that Steinkamp's son and wife are trying to stay on Vancouver Island while he receives care.

"They've got to stay for maybe a month," said the man's brother.

Peter Steinkamp says the injury was a freak accident, noting that his brother runs marathons and takes part in other outdoor activities across the U.S.

"So him doing this was not much of a thing," said the brother.

"His son was shook up as you can imagine."

Family members say they're grateful for the rescue teams that evacuated Steinkamp from the remote trail, and for the medical teams that are looking after him now.

Steinkamp's brother says the family is keeping him in their thoughts, especially as he undergoes another surgery.

"[We're] not out of the woods when they say, 'We've got to fight this infection in the brain.' It's not very easy," he said.

Canada to upgrade Latvia battlegroup to a brigade, boost number of troops

Canada has signed an agreement to upgrade the 2,000-soldier battlegroup it leads in Latvia to a brigade, boosting the number of troops and pledging to lead it for at least the next five years.

Through the use of MRI technology and spearheaded by researchers at Western University, the cause of long COVID symptoms have been identified for the first time.

DEVELOPING | Opioid manufacturer agrees to $150M settlement after class-action lawsuit led by B.C. asks for $60B

British Columbia says a proposed $150-million settlement with Purdue Pharma Canada has been reached for the recovery of health-care costs related to the sale and marketing of opioid-based pain medicines.

More than half of flights at some Canadian airports getting cancelled, delayed: data

Recent data shows more than half of all flights from some of Canada's major airports are being cancelled or delayed, as frustrations for travellers mount due in part to increased summer travel and not enough airport staff.

NATO calls Russia its 'most significant and direct threat'

NATO declared Russia the 'most significant and direct threat' to its members' peace and security on Wednesday and vowed to strengthen support for Ukraine, even as that country's leader chided the alliance for not doing more to help it defeat Moscow.

Access to mental health services is taking a hit in Newfoundland and Labrador as psychologists in the province continue to leave the public system en masse.