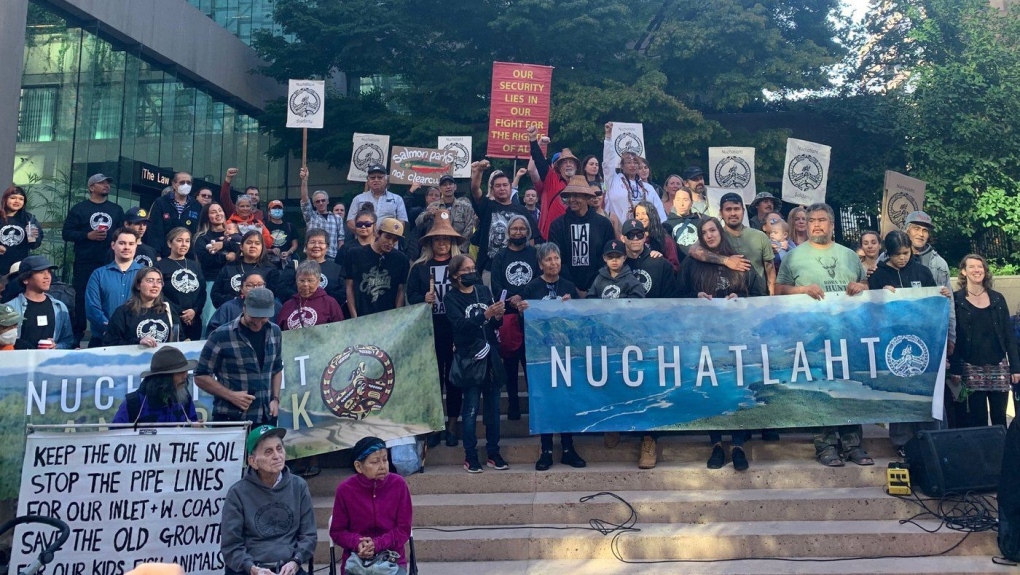 Nuchatlaht and Nuu-chah-nulth First Nation leaders and supporters rally at the BC Supreme Court in Vancouver on Tuesday, Sept. 27, 2022, ahead of closing arguments in an Indigenous title case between the Nuchatlaht First Nation and the B.C. government. THE CANADIAN PRESS/Brieanna Charlebois
Vancouver -

A lawyer for the Nuchatlaht First Nation, which is fighting for title to part of Nootka Island in British Columbia, has told a court that the underlying objective of the proceeding is reconciliation.

Jack Woodward said at the start of his closing argument that the province missed its opportunity and has instead placed “the burden of reconciliation squarely on the court,” in the first test for the landmark 2014 Tsilhqot'in Aboriginal title decision by the Supreme Court of Canada.

That case recognized the Tsilhqot'in Nation's rights and title over a swath of its traditional territory in B.C.'s central Interior, not only to historic village sites.

“The province presents the court with a stark choice: dismissal or declaration. No alternatives have been presented,” Woodward told the court Tuesday.

“I am shaking my finger at the province for that because it certainly was in their control and power to help design and accommodate a process that would have put the court in a less binary position.”

The lawsuit filed by the Nuchatlaht First Nation in the B.C. Supreme Court in 2017 asserts that the B.C. and federal governments denied Nuchatlaht rights by authorizing logging and “effectively dispossessing” the nation of territory on Vancouver Island's west coast.

The B.C. government denies that the Nuchatlaht hold Aboriginal title over the 230-square-kilometre area, which includes the northwestern part of Nootka Island. The province said it has met its obligations under agreements with the nation related to forest resources.

Crown attorney Jeff Echols previously argued in March that the “modern-day” Nuchatlaht draws its membership from a broader base of Indigenous people, and the First Nation wasn't alone in using the island when the Crown asserted sovereignty over what is now B.C. in 1846.

He said case law had established that Aboriginal title is not transferable, and the legal test would not allow the modern Nuchatlaht to take on the title of other historical Indigenous groups whose members joined or merged with them.

But Woodward said Tuesday the Nuchatlaht occupied and used the claimed area before and during 1846.

He said the Nuchatlaht had a “magnificent advantage” in the case, in that “not only were there the different local groups who all had occupation of their respective territories, but they were organized into a confederacy.”

“This is remarkable fact,” he said. “I think that's the crux of the case.”

He also argued the Nuchatlaht had showed restraint in their claim, saying it doesn't overlap with any other First Nation's territory or federal land.

“A First Nation that comes to court with a reasonable, moderate, uncluttered claim presents an opportunity for reconciliation,” Woodward said.

Supporters of the claim rallied outside the court complex in Vancouver before closing arguments began. Among them was Nuchatlaht council member Erick Michael.

“We're here to fight for our past generations and future generations to come so we can have a healthy, strong future,” he told the crowd.

Mariah Charleson, vice-president of Nuu-chah-nulth Tribal Council, which represents 14 communities including Nuchatlaht, said she made the trip to the courthouse steps to show support in their “fight against B.C.”

“This is a case that is going to set the precedent on how B.C. deals with the land issue. 'Land Back' is a real thing. It's giving the land rights title inherent jurisdiction back to the original landowners and the Nuchatlaht are setting the precedent,” she said.

This included 20 directives for the Crown to prioritize resolution and negotiated settlement, while reducing the potential for legal action over Indigenous rights and title.

In a court transcript from April, supplied by the Nuchatlaht's legal team, Crown attorney Echols said the province knew about the directives before their release and does not intend to adjust its arguments for trial.

At the time, Woodward said the government's decision not to adjust the case based on its own new litigation directives “undermines the process of reconciliation.”

Hearings are set to continue until Oct. 14.

This report by The Canadian Press was first published Sept. 27, 2022.

While the federal government was successful in procuring COVID-19 vaccines amid an urgent pandemic situation, the Public Health Agency of Canada (PHAC) fell short when it came to minimizing the number of doses wasted, according to Canada's auditor general.

Montreal Canadiens star goalie Carey Price reversed course and said he did in fact know about the 1989 Polytechnique shooting spree that killed 14 women in Montreal despite previous comments that he didn't. He also apologized to those that may have been upset by his comments against the proposed federal gun legislation.

Critical injuries in plane crash on Highway 401 near Cornwall, Ont.

Two occupants of a small plane were seriously injured when it crashed into the Highway 401 median near Cornwall, Ont. Monday night.

opinion | How to get the increased GST tax credit

To help combat inflation and help lower- and modest-income families, over the span of six months, Ottawa is issuing an additional one-time GST tax credit to eligible taxpayers. Personal finance contributor Christopher Liew breaks down who's eligible for the increased GST credit, explain how to get it, and how much you could receive.

A man was arrested Tuesday on suspicion of assault after an egg was allegedly hurled towards King Charles III during a visit to a town centre, police said.

The Canadian branch of human rights organization Amnesty International says it was the target of a cyberattack it believes was sponsored by the Chinese state.

The suspect accused of entering a Colorado LGBTQ2S+ nightclub clad in body armor and opening fire with an AR-15-style rifle, killing five people and wounding 17 others, was formally charged with hate crimes as well as murder on Tuesday.