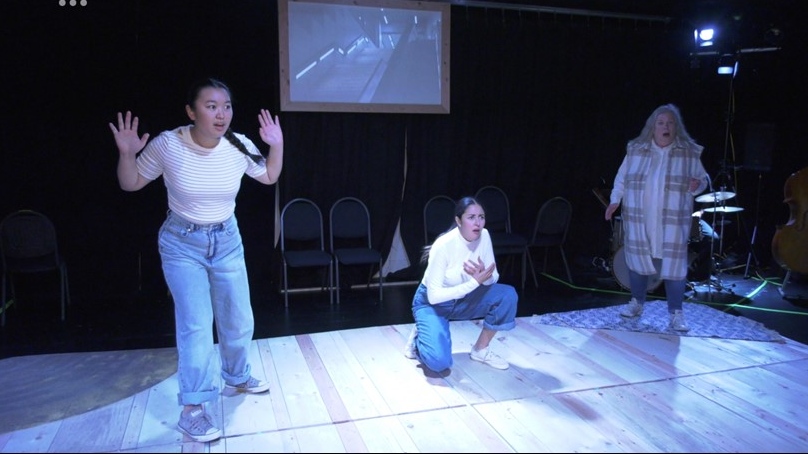 The newest production to come to the Victoria-based Theatre Skam satellite stage is a semi-autobiographical tale of the playwright's battle with alcoholism called, It’ll Come to Me.

The story begins when lead character Christian decides to leave his Theatre Skam friends and stay in New York City with only a dollar in his pocket. As his attempts to make it in the Big Apple are foiled, he turns to alcohol for comfort.

"It's about his struggles with addiction and the tolls that it took on him personally – and some of the challenges he had in his personal life," said It’ll Come to Me Director Matthew Payne.

"We always think in the theatre that by focusing on the personal story and the details, we find something that’s universal that other people can relate to," he said.

Payne says the play has been in development with the Theatre Skam company for five years. He says it is only coincidental that the theme of the play, a man struggling to overcome addiction, reflects the struggles that many British Columbians face with the ongoing health emergency of the opioid crisis.

The play takes the audience through the character Christian Martin’s life and the people who come into it and leave it as he spirals down through his alcoholism. It's only when he returns to Victoria and finds himself homeless and living on the streets that he finds his own redemption at an Alcoholics Anonymous meeting.

"I never looked back and I stopped drinking right then and there," said It’ll Come to Me author Christian Martin. "This play is about my life through the sequence of alcoholism."

The play marks the return of Theatre Skam’s indoor performances since the beginning of the pandemic.

"This is an indoor production, complemented by a full design team, lights, musical direction of a trio of musicians," said Payne. "It's a fantastic feeling to be getting back to a live indoor performance."

The play runs until Nov. 28, with preview performances beginning on Nov. 18 at the Theatre Skam satellite theatre stage at 849 Fort St.

Due to COVID-19 protocols seating is limited to an audience of 16, and all patrons must wear masks.

Tickets for It’ll Come to Me can be purchased online at the Theatre Skam website.