In an effort to train foreign chefs around the world authentic Japanese cuisine, the Japanese government has recognized Vancouver Island University as a bronze level-certified institution in Cooking Skills for Japanese Cuisine in Foreign Countries.

The certification will be part of the second year curriculum of the Culinary Arts program at VIU and will teach basic Japanese techniques for students who are interested in working in Japanese restaurants. 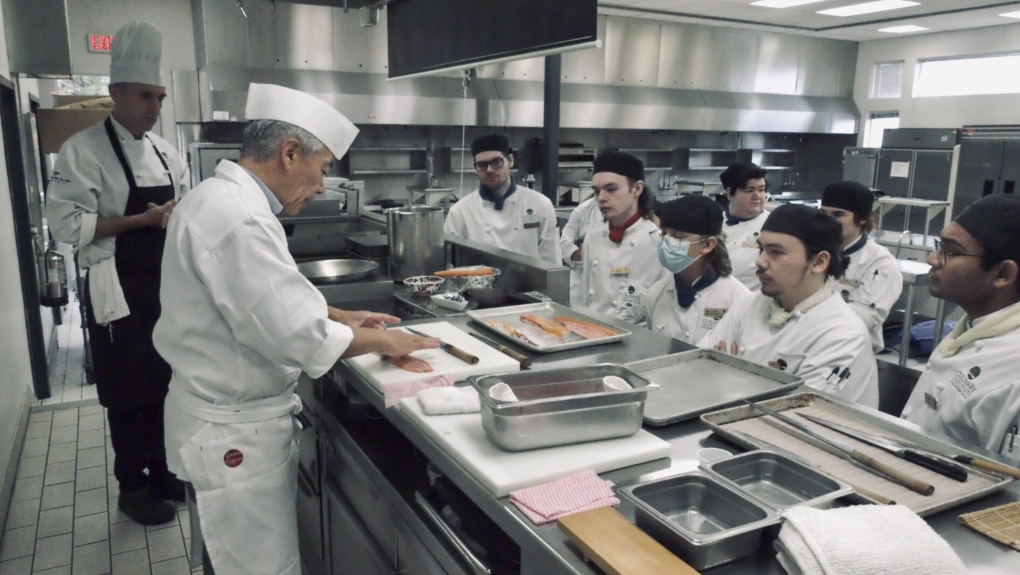 A delegation from Japan was on hand at the Nanaimo, B.C., campus on Thursday morning, including Motoi Kurisu, a renowned chef from Kyoto who was sharing fundamentals of fish and vegetable knife work to culinary students.

The Japanese Ministry of Agriculture selects specific culinary institutions across the world to be certified.

Working with the Japanese Culinary Academy several years ago, the ministry found that Japanese food represented across the world was not authentic and decided to launch the certification program.

"Sushi, for example, is only one very small microcosm to authentic Japanese cuisine," said VIU chef instructor Avi Sternberg, who was translating for chef Kurisu.

"The opportunity to introduce the larger world of Japanese authentic cuisine, [Kurisu is] very excited about," said Sternberg.

Now, VIU is just one of 12 schools in the world to be certified and is only the second one in North America.

The certification will be offered starting next spring at both the Nanaimo and Powell River campuses.

Protests in Iran continue despite internet blackouts; Canadians respond with rallies of support

Nearly two months after the protests were first ignited, the people of Iran continue to march in the streets, despite increasing violence, internet blackouts and arrests, while Canadians support them overseas, organizing rallies in response.

Protester with rainbow flag runs onto field at World Cup

A protester ran onto the field Monday carrying a rainbow flag and wearing a blue Superman T-shirt that said 'SAVE UKRAINE' on the front and 'RESPECT FOR IRANIAN WOMAN' on the back during a World Cup match between Portugal and Uruguay.