'It was a total wreck': Nanaimo family escapes house fire

A large foster family escaped an evening house fire in central Nanaimo, which ruined their home and damaged another next door.

It happened Tuesday evening around 8:30 p.m. on Doric Avenue near Acacia Avenue.

A neighbour who lives next door to where the fire took place says he heard screaming from his neighbour's backyard – then his wife also started to yell, alerting him to get out of their house.

"When we came up to the sidewalk there, there were flames shooting right out of the side of the house," said Dave Rider. "It was pretty, pretty scary."

Nanaimo Fire Rescue Assistant Chief David Dales says the fire started in the carport area, outside the family’s home. The cause of the blaze is still under investigation. 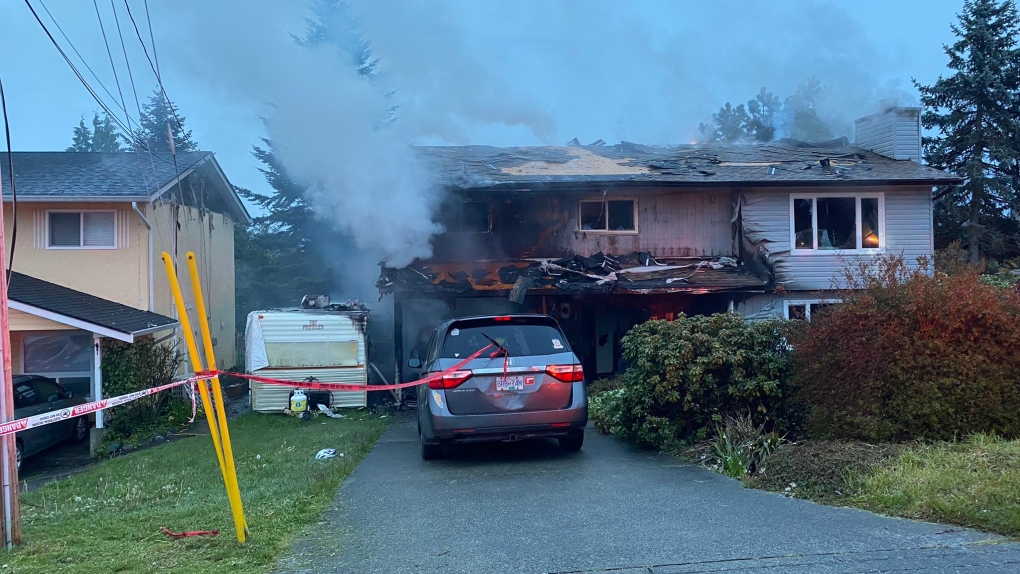 He says eight people lived in the home where the fire started – with the children ranging in age from three to 18.

Dales says paramedics took all of them to hospital due to concerns over smoke inhalation and for observation.

"All of us were running down here trying to help them out," said another neighbour, Carrie Webber. "The parents were pretty shaken up as well."

Two dogs and two cats are also safe, according to firefighters.

"It went fast," said neighbour Richard Bouchard. "Something I don’t want to see ever again."

Another witness says he was driving home from crab fishing when he noticed plumes of smoke in the sky.

Upon arrival at the scene, Mark Hernandez says he was surprised at how calm everyone was, watching the firefighters knock down the flames – and he was impressed by the response.

"The whole house was on fire. It was a total wreck," says Hernandez. "The way they manage it is quite impressive. It makes you feel secure."

A GoFundMe campaign has also been launched to support the family as they get back on their feet.

According to the organizer, the family escaped the fire with just the clothes on their back.

Simple advice from a friend to stay near the door may have saved Yenifer Yulisa Cardona Tomás from the deadly fate that befell 53 other migrants when they were abandoned trapped in a sweltering semi-trailer last week on the edge of San Antonio. The 20-year-old from Guatemala's capital said it was already hot on June 27 when she stepped out of the warehouse on the Texas side of the Mexico border where she had been waiting and climbed into the back of the trailer.

Tamara Lich, an organizer of the 'Freedom Convoy,' is set to appear in an Ottawa court today for a bail hearing after being arrested last week for allegedly breaching one of her bail conditions.

One of the twin brothers who was killed in a shootout with police outside a bank in Saanich, B.C., last week had applied to join the Canadian Armed Forces but was rejected, a military spokesperson confirmed Monday.

Highland Park's police chief said the 22-year-old man identified as a person of interest in the shooting that killed at least six people, wounded at least 30 and sent hundreds of people fleeing from an Independence Day parade in suburban Chicago on Monday has been taken into custody.