The massive logs piled up with smaller ones along the side of a forestry road on northern Vancouver Island are eye-catching.

As the B.C. government promises deferrals of old-growth logging and protesters push for the end of the practice entirely, videos recently recorded near the Tsitika River north of Woss put the old-growth fight into perspective for the man who shot them.

"It's a bit shocking to see trees the size of the ones you'd see in Cathedral Grove be dropped," said the camper who recorded the videos, who has asked to remain anonymous because of concerns about how speaking to media might affect his employment.

The sight was so surprising, such a contrast to the province's rhetoric, that the camper thought he may have stumbled upon something illegal.

CTV News inquiries to the Ministry of Forests and the company conducting the logging quickly dispelled this notion. The huge trees lying by the side of the road were harvested perfectly legally.

"Old-growth is an important input to many value-added manufacturing plants," a statement from the ministry reads, in part.

"There is no general moratorium on old-growth logging aside from the provincial old-growth deferral initiative."

The area where the videos were recorded is Crown land. BC Timber Sales began preparing it for sale in 2015, but re-examined it in 2021 to ensure that it conformed to the agency's "Coastal Legacy Tree Policy, the Special Tree Regulation, and BCTS’ Large Cultural Cedar protocol," according to the ministry.

"As a result of the re-examination, an area of the original cutblock was removed from the harvest area to retain Coastal Legacy Trees and Large Cultural Cedar," the ministry said.

The licensee responsible for harvesting the trees, A&A Trading, identified the cutblocks in an email to CTV News as L038C4B3 and L038C4QR.

Both it and Cypress Creek Logging – the company it hired to do the work – are based in Campbell River. Both companies told CTV News they followed all the regulations governing logging in the province, and both defended the practice of harvesting old-growth, citing the industry's importance to the North Island economy and the myriad forests in the province that are already protected from logging.

"Old-growth forests are still an important component of the forest economy, providing $3.5 billion in GDP and supporting 38,000 jobs critically important to B.C. families," said A&A, in its statement.

"A careful approach to old-growth management does not equate to the blanket preservation of all old-growth. Young, sustainably managed forests are important too and are a part of natural ecosystem diversity." 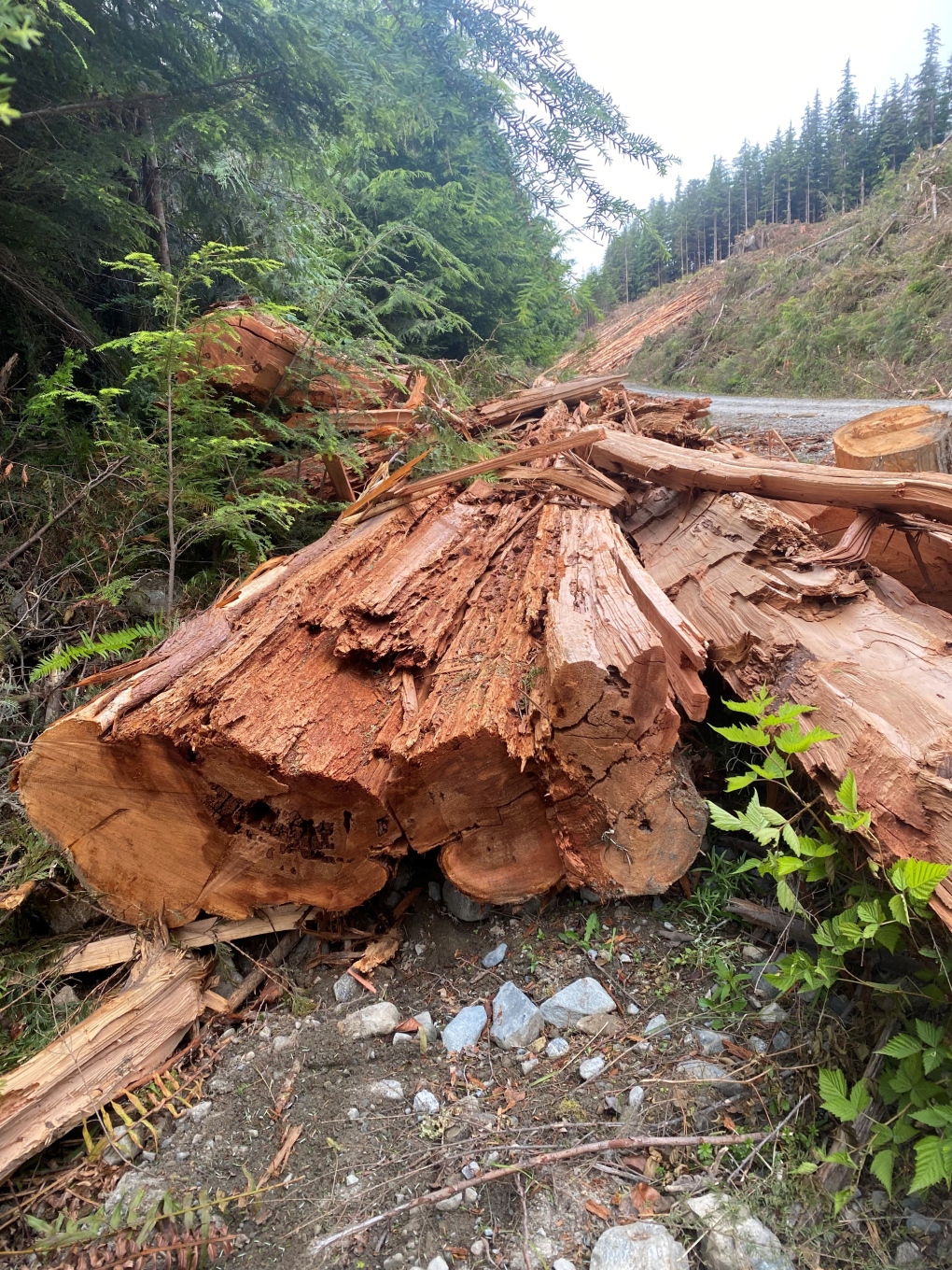 The massive logs piled up with smaller ones along the side of a forestry road on northern Vancouver Island are eye-catching.

"The blanket preservation of all old-growth" is the goal of the various environmental activist groups that have blockaded forests on southern Vancouver Island and engaged in civil disobedience – including blocking highways – across the province in recent years.

For more than a year, protesters camped out in the Fairy Creek watershed on southern Vancouver Island in an effort to stop the logging of old-growth trees there. Police made more than 1,000 arrests while enforcing a court injunction to allow logging company Teal Jones to continue its operations.

On Wednesday, four groups – Elders for Ancient Trees, the Rainforest Flying Squad, Legal Observers Victoria and the Social Environmental Alliance – made a formal request to the RCMP's Civilian Review and Complaints Commission for an investigation of police conduct during their enforcement effort.

Against this backdrop of unrest, the provincial government announced last year that it planned to seek logging deferrals on 2.6 million hectares of old-growth forest while consulting with First Nations about the future of logging on their traditional territories.

That announcement followed earlier deferrals proposed by the Huu-ay-aht, Ditidaht, and Pacheedaht First Nations specifically in the Fairy Creek and central Walbran areas and accepted by the B.C. government.

At the time, Premier John Horgan called the deferrals "monumental steps" and said the forestry industry would continue to be an important part of B.C.'s economic future, but "has to be done in a different way."

The province is currently developing a new old-growth management strategy, which the Ministry of Forests said is expected to be completed "within the next two years." 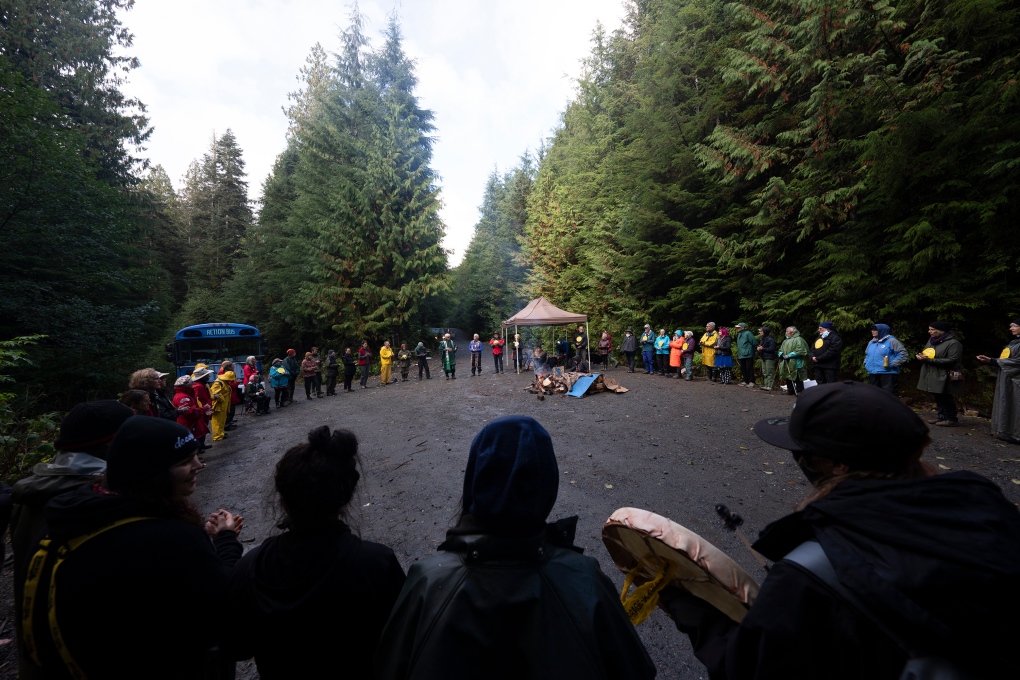 Elders for Ancient Forests along with people declaring themselves "land defenders" take part in a peace circle along a logging road in the Fairy Creek logging area near Port Renfrew, B.C. Tuesday, Oct. 5, 2021. THE CANADIAN PRESS/Jonathan Hayward

The protesters at Fairy Creek remained in place after the initial deferrals were announced, arguing that the province had not gone far enough and must commit to ending the practice of old-growth logging in B.C.

Joshua Wright is a forest defender with Last Stand for Forests, one of the groups involved in the Fairy Creek blockades. He described the videos of the logging north of Woss as "a perfect example of what's happening across the province."

"I think many people, when they hear the BC NDP talk about the old-growth deferrals and old-growth protection measures and see their political advertisements saying they're protecting old-growth, people somehow imagine that old-growth logging isn't happening anymore," Wright said.

"Unfortunately, it wasn't very surprising to me when I saw that video, because that's what we're seeing across the province," Wright said. "The NDP might not want people to realize that that's what's happening, but that's absolutely what's happening at a systematic level."

To the argument from government and industry that old-growth is an important component of the forest economy that accounts for thousands of jobs, Wright responded that the end of old-growth logging is inevitable, whether it comes from government regulation or the harvesting of all unprotected areas.

He suggested the provincial government should be legislating a transition away from old-growth logging as quickly as possible, and offering support to affected workers.

"An end to deforestation – and, you know, climate action – looks like ending old-growth logging," he said. "It looks like a genuine attempt to transition industries away from old-growth logging and into an industry that is based off of value-added, second-growth manufacturing." 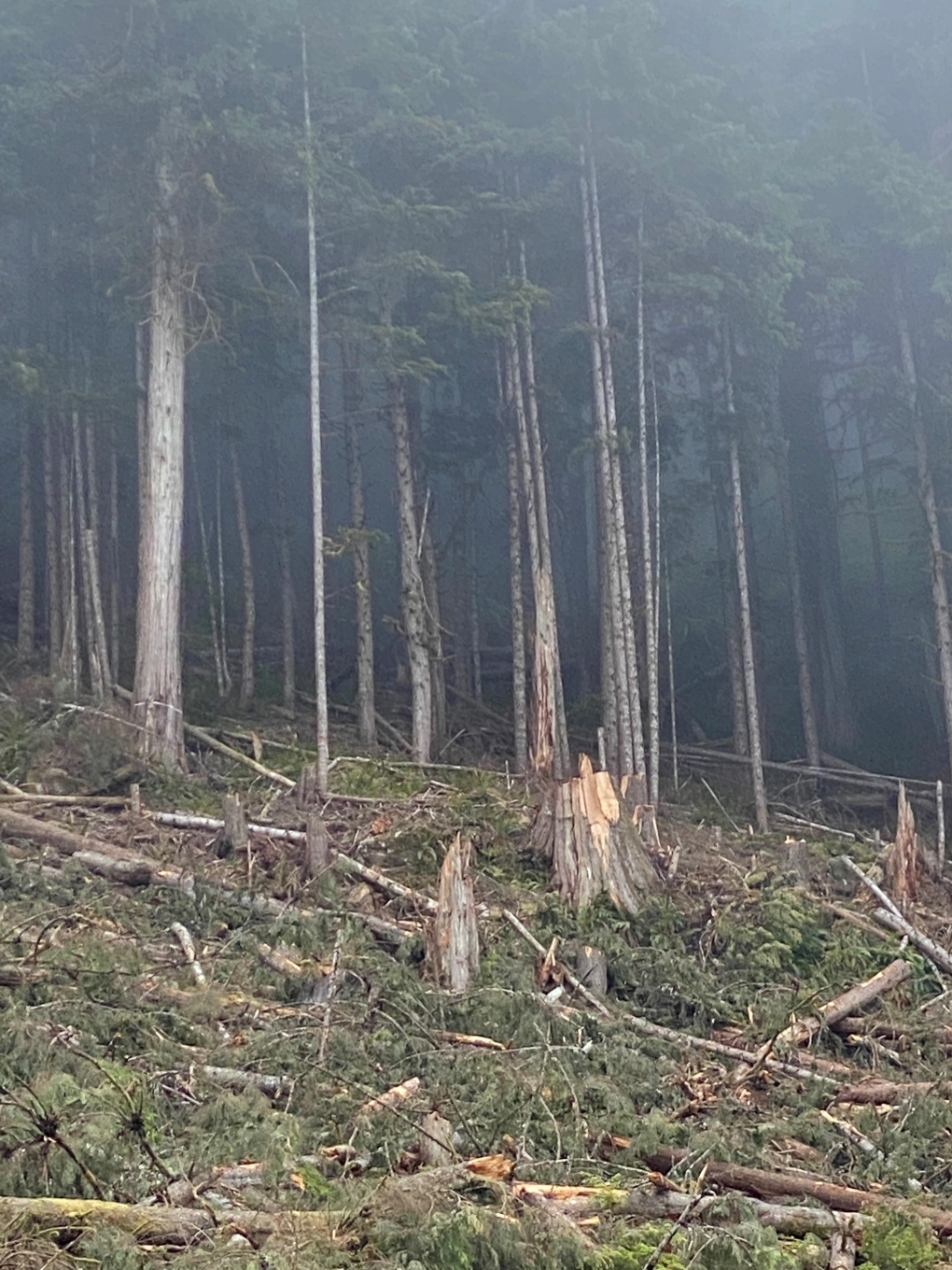 Stumps are seen along a forest service road near the Tsitika River north of Woss, B.C. on Vancouver Island.

In its statement to CTV News, A&A Trading expressed concern that the videos were shot in an active worksite, where barricades and signs are set up warning against entering due to safety risk.

"This is an active work area with strict access and communication protocols to ensure safety of the workers and the public," the company said. "Entering the site without authorization creates a very serious hazard, and doing so intentionally is completely irresponsible."

The man who shot the videos told CTV News he's not an activist and did not breach the barriers to the worksite without permission.

He said he had been camping by the river for three nights, and was blocked in by the logging activity when he tried to leave. He said workers let him pass through when he explained his predicament to them.

He also said there were no barriers on the road when he passed through on the way to his campsite, and asserted that anyone who arrived early enough in the morning or late enough at night would've been able to record the same videos he did, because the logging road is open to the public when work is not ongoing.

As for why he recorded the videos, the camper said he thought the sights he was seeing didn't match the rhetoric from the B.C. government around protecting old-growth.

"I was just kind of shocked to see that, especially in an area that's just upstream from a highly sensitive ecosystem," he said.

The area is about 10 kilometres upstream from Lower Tsitika River Provincial Park. To him, it seemed ripe for deferral and protection.

"The area does not overlap with at-risk old-growth priority deferral polygons," the Forests Ministry said in its statement.

"High-risk old-growth area is where there is determined, near-term risk of irreversible biodiversity loss."

CTV News presented that explanation to the camper and asked him for his reaction. Did he believe, like the activists he had sought to distance himself from, that there should be no legal logging of old-growth trees in B.C.?

'I'm going to be the premier of all Quebecers': Legault elected with majority government

CTV News has declared the Quebec Liberal Party (PLQ) will retain its official Opposition status, and Party Leader Dominique Anglade has been re-elected.

Two winning lottery tickets in Ontario are on the verge of expiring.

The Iranian government's crackdown on protesters is likely to 'intensify' in the coming days, despite sanctions from Canada and international condemnation, an expert says.