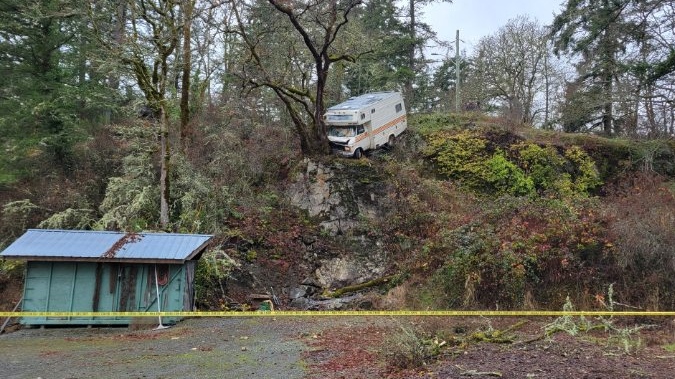 The RV was carefully retrieved by a tow truck and impounded for 30 days. The driver was issued an immediate 90-day driving prohibition. (Saanich police)

An impaired driver is lucky to have sustained only minor injuries after driving his RV off a cliff in Saanich, B.C., according to police.

The vehicle was prevented from plummeting all the way to the bottom of the embankment when it struck a large tree on the way down.

Saanich police responded to the scene in the 1400-block of Charlton Road around 10:30 a.m. Friday.

The driver was found nearby and subsequently failed a roadside breath test for impairment, the Saanich Police Department said in a release Friday afternoon.

The RV was carefully retrieved by a tow truck and impounded for 30 days. The driver was issued an immediate 90-day driving prohibition.

"The driver was fortunate that a large tree stopped the RV from falling further down the cliff, which would have likely resulted in more serious injuries," Saanich police said in the release.

"While impaired driving is completely preventable, police continue to see motorists driving while under the influence of alcohol or drugs at all times during the day."

The police department is reminding drivers that road checks for impairment are happening throughout Greater Victoria this month. Holiday revelers are urged to plan a safe ride home if consuming drugs or alcohol.

Two pilots walked away safe after a large air tanker owned by a Vancouver Island company crashed while battling wildfires in western Australia.