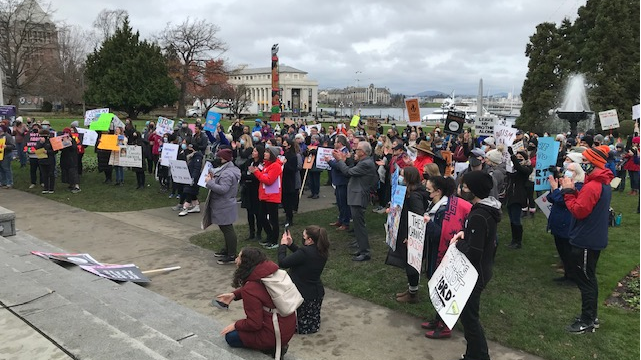 Parents, kids and autism support advocates protested outside B.C.’s legislature Wednesday calling on the government and Mitzi Dean, Minister of Children and Family Development, to halt pending changes to how families access autism support and funding in the province.

Hundreds gathered on the front steps of the legislature to hear from multiple speakers as they voiced concerns about B.C.’s new service model.

The changes were announced at the end of October, and many attendees said they were blindsided by the news.

In a statement, the province said that the new "one-stop family connection hubs" will be able to offer services to a broader range of children without requiring a diagnosis first.

"The existing patchwork of programs has left too many children and youth with support needs behind," said Dean in the release on Oct. 27.

The province says the new hub-based model will also be more accessible to families across the province, and that the move comes following consultation with the "all-party Select Standing Committee on Children and Youth," which spoke with more than 1,500 families, service providers and advocates.

Advocates at the rally Wednesday, however, said that switch in service model will result in longer wait times to access services for children with autism.

"To create a plan of this scale without consulting with the people directly involved is really the height of arrogance," said Dr. Glen Davies, a registered psychologist and the Director of ABLE Developmental Clinic Inc.

"Hubs based on needs alone have been tried before in Ontario and Australia," said Davis at the rally Wednesday. "And basically what you are doing is (changing) a waiting list for assessment to a waiting list (that's) much longer for treatment."

Jennifer Newby, a parent of two autistic children, also spoke at the press conference and had some tough words for the Minister of Children and Family Development.

"I think that my child will be condemned to a wait list," said Newby, "And when that happens, Mitzi Dean, I need you to understand you have doomed my family." 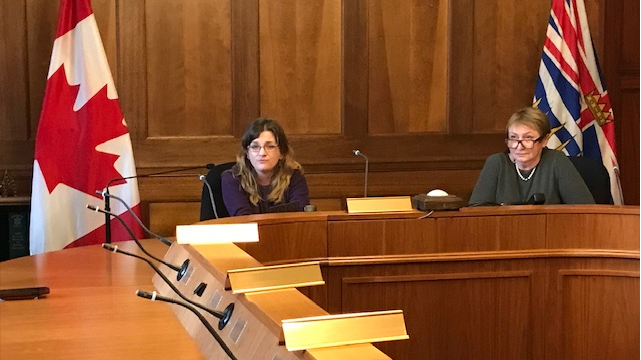 Advocacy groups and parents are worried about what the change will mean for their current supports, and they’re calling for more consultation before the plan is implemented.

Individualized funding for families to use for autism support will be phased out by 2025, when the government connection hubs will be available province-wide.

Holly Kennedy, a young autistic girl who travelled from Surrey, B.C. with her family, spoke to the crowd about her journey with autism and had a strong message for the minister.

"I am asking Minister Dean to truly consider the harm that will be done by abolishing autistic funding and adding bureaucracy where it isn’t needed," she said.

At the rally, standing in solidarity with parents and advocates, were Liberal and Green opposition party leaders.

"It is time for this government to press the pause button," said Shirley Bond, Leader of the Opposition Liberal Party.

"It is disrespectful at best and arrogant at worst that they didn’t talk to you about the future of your families."

Advocates say the new model will result in longer wait lists and will cost the province more money down the road as autistic children get older.

The rally lasted several hours and is only the beginning, say parents and autism advocates. They plan to keep pushing to have the proposed changes dropped and call for improvements to the current system.