Fire crews had their hands full during a chaotic fire scene at a community park in Cumberland Wednesday night. The blaze resulted in a destroyed barn, a handful of torched vehicles, a heavily damaged house and several scorched trees.

Crews were called to the Perseverance Creek Historic Park at 6:33 p.m. for a brush fire, which was upgraded to a structure fire.

“When we arrived there were flames shooting 100 feet up the trees. This huge barn was still intact but it was just about ready to cave in and the radiant heat caught the house on fire next to it,” said Chief Mike Williamson of Cumberland Fire Rescue.

He said there were two young people on scene when they arrived.

“When we arrived one young guy told us there was another young guy in the house so the deputy chief took the house fire and I worked on the barn fire and the bush fire so we had to split our crew."

The first individual was taken away by RCMP as crews searched the home for the second one.

“We did a primary, secondary and even a third search to make sure. We still didn’t have any idea where the person was until we found out he was fine and safe,” Williamson said. 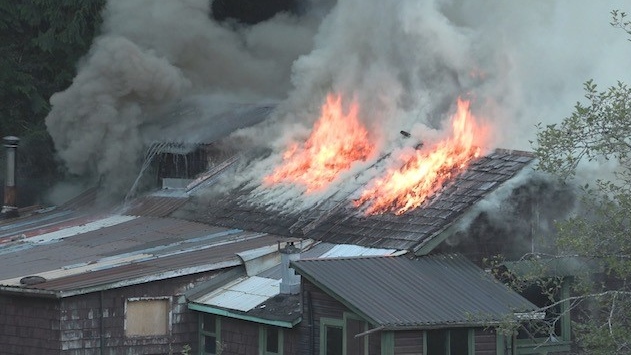 The fire began in a barn on the property locals know as the “Souther Farm,” which was developed in 1960-61 and previous to that “John Henry Brown’s Cabin” which was built in the 1930s.

The fire spread into the home which was unoccupied. The property is currently owned by the Village of Cumberland and was in a no-trespassing area.

Cumberland’s fire crew was assisted by the Courtenay Fire Department and a four-person crew from the Coastal Fire Service.

There were immediate concerns about the fire spreading into the nearby forest.

“The flames were 100 feet up the trees behind the barn and the embers were going a couple of hundred feet into the forest," Williamson said. "BC Wildfire were here so we sent them into the forest to do checks for embers and small burns, they found quite a few of them actually, while we concentrated on the house and stopping this barn."

Battling the fire was made more difficult because of the home’s location at the end of a long driveway and bridge, which couldn’t be crossed by vehicles. 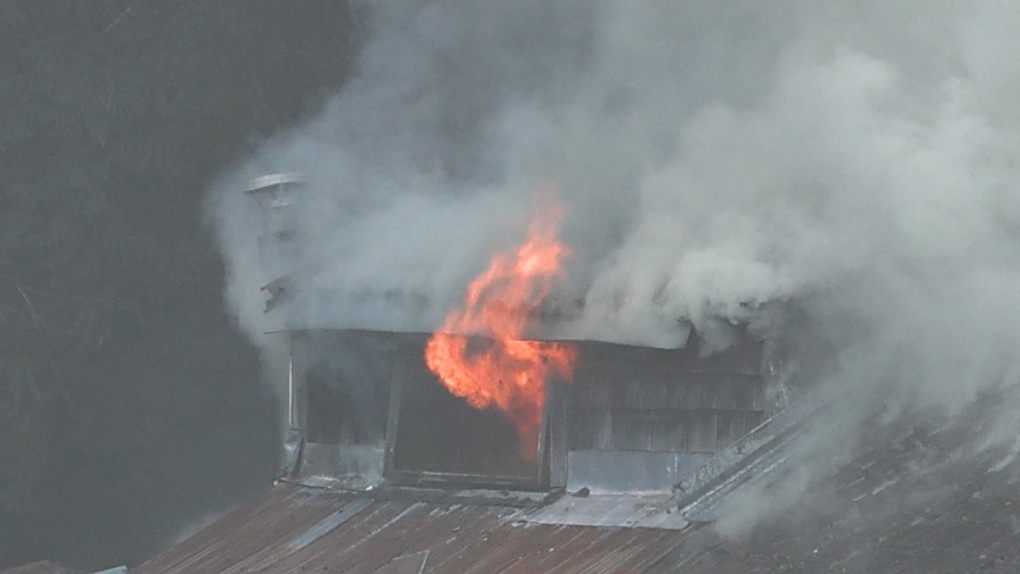 “Very difficult to get in here because there’s no fire hydrants. It’s about 300 feet is as close as you could get the fire truck," he said.

There were other complications in fighting the flames.

“The barn is about 75 feet long. There’s about three or four vehicles at the end of it. There were gas cans and propane tanks going off and it was fully involved and not much to save in that but we were more concerned about the forest,” Williamson said.

Cumberland Mayor Leslie Baird says the village purchased the property last year and the home was to be demolished. It is located on a historically significant area of the village, positioned between what was Chinatown on one side and a Japanese settlement on the other.

“I actually was in it not long ago to see what it looked like. If you looked at it from up on the hill it looked amazing and we wanted to keep it but it was far beyond repair," she said.

Smoke from the fire was visible throughout Cumberland and drew spectators, including Rick Olsen who was friends with the home’s previous owners.

“It’s definitely sad to see it go, it’s a great little place. It’s one of these rambling old houses that was built on Depression money so there’s about 50 different add-ons to it,” Olsen said.

There was talk of impeachment Monday at the Trump Organization's criminal tax fraud trial -- not former President Donald Trump's, which happened twice -- but whether lawyers for his company were angling to impeach their own witness, longtime Trump accountant Donald Bender.

The Pakistani Taliban on Monday ended a months-long cease-fire with the government in Islamabad, ordering its fighters to resume attacks across the country, where scores of deadly attacks have been blamed on the insurgent group.