'His face was right up at the window': Conservation officers urge bear mindfulness on Vancouver Island

"I’m in my underwear, threw on some flip flops, grabbed the kids T-ball bat," said Debron.

He opened his house door and found nothing, so he went back inside. Then he heard the noise again, so he flicked on his outdoor lights and looked out his window.

"And this bear's butt just filled my whole window and he was just going through the trash, having a big garbage buffet," said Debron. 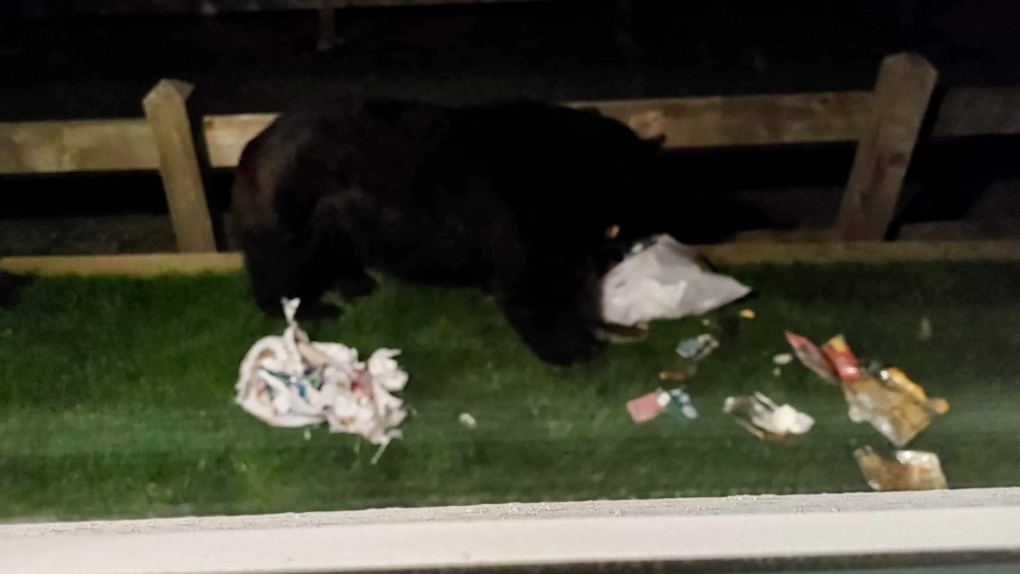 A black bear is pictured outside of Paul Debron’s Nanaimo home eating his garbage. (Submitted)

A few kilometres away, Melinda Mills got an afternoon phone call from her next-door neighbour.

"He told us there was a bear that went up the stairs," said Mills.

She then looked out her window to find a bear, chomping down on her garbage.

"His face was right up on the window so that was a very close encounter," said Mills.

B.C. conservation officers are once again asking the public to store their garbage bins indoors if possible, as a matter of safety for both the community and for bears.

"I can’t stress it enough, if you don’t secure your garbage, you’re going to get a bear killed," said Sgt. Stuart Bates of the B.C. Conservation Officers Service (BCCOS).

"Once bears get addicted to garbage, they become what we call 'food conditioned' and while they are doing that, they are in the presence of people," he said.

"They lose their fear of people and there’s only one outcome for a bear that reaches that level."

Generally, that outcome is a death sentence for the bear. The BCCOS says bears getting into garbage is the number one call the agency receives.

"Some of them unfortunately are getting into some mischief," said Sam Webb, president of the Wild Wise Society.

With bears emerging from hibernation, they are focused on food. On the South Island, bear sightings are going up.

"The ones that are coming out more on the West Shore. I think, is a little bit more surprising to people," said Webb.

If keeping your trash inside isn’t an option, GFL Environmental Victoria is currently taking a waitlist for bear-deterrent bins.

The lids are secured by two carabineers and are reinforced with steel plating.

The bins are made to order and have proven to be very effective when it comes to frustrating bears and keeping them out of your garbage.

The Ukrainian Canadian Congress wants Canada to up the pressure on Vladimir Putin's regime and lead a global charge to get Russia expelled from the G20.