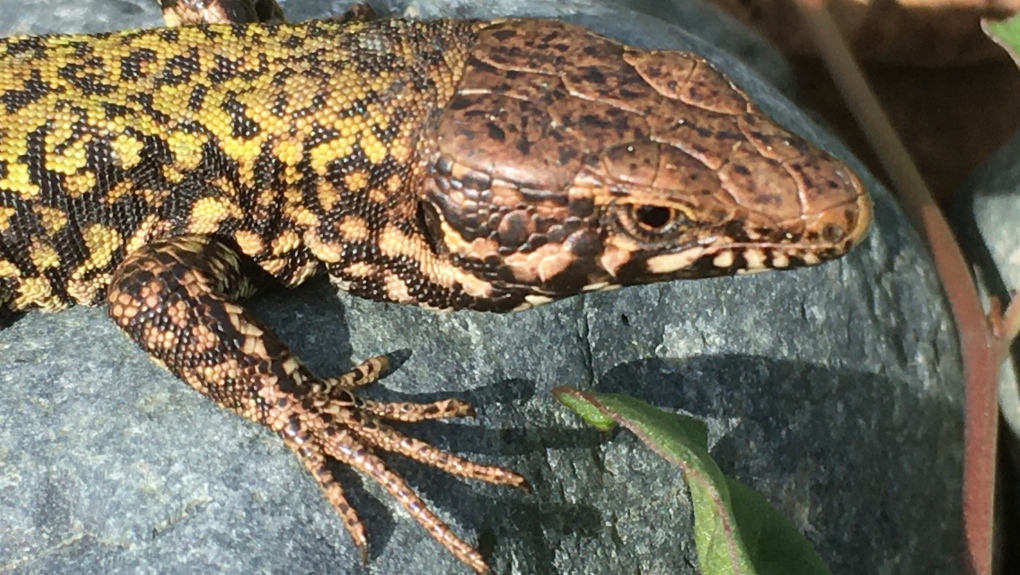 Originally from Central Italy, at least 12 common wall lizards were released from a small private zoo on Vancouver Island in 1970.
Victoria -

What began as someone’s pet more than 50 years ago in Saanich has now ballooned into an invasive species spreading across the South Island and even the Lower Mainland.

Common wall lizards now have a local population of between 500,000 and 700,000 and growing, according to Gavin Hanke, curator of vertebrate zoology at the Royal BC Museum in Victoria.

“This is a lizard that shouldn’t be here,” says Hanke, “People shouldn’t be letting their pets go, but this is precisely what happened here.”

The small lizards can be seen sunning themselves on rocks and logs in neighbourhoods throughout the region, but are very skittish when you get near them and will usually zip away.

Originally from Central Italy, they were introduced to Vancouver Island in 1967. In 1970, at least 12 lizards were released from a small private zoo, and since then the population has exploded.

They have spread from the Capital Region to Pender, Salt Spring and Denman islands, as well as a recent population discovery south of Chilliwack.

The wall lizards have done extremely well here in a climate perfectly suited to their needs. The winters aren’t too cold, summers are fairly hot and there are lots of places for them to live in amongst rocks, logs and gardens.

“Their impact we have yet to really discover – on insects, spiders and pollinators here on the Island,” says Hanke.

“We have photographs of them eating termites, ants, wasps,” the curator adds. “They’ll eat honey bees, probably… We have records of them eating mason bees, bumble bees and they will even eat each other.”

The biggest lizard documented locally was 21 centimetres long, but they can range in size depending on age and whether their tails have been damaged by predators like cats and some birds.

There have been no attempts to eradicate the invasive lizards, according to Hanke. From Sidney to Metchosin, it’s probably too late to even try due to their large populations.

There is still a chance to eradicate them on the Gulf Islands, farther up Vancouver Island and on the Lower Mainland, but there is no official plan in place to do so.

Hanke spends hours studying the wall lizards in his own yard and neighbourhood not far from the Cedar Hill Recreation Centre in Saanich.

The lizards do not cause any physical damage to their habitat but do leave poop on sidewalks, decks and patios.

Hanke is tracking lizard sightings on an a website called iNaturalist. Readers can take a picture of a wall lizard and upload it to the site where the species’ spread can be tracked.

It’s not known yet if the invasive lizards are conflicting with the province’s homegrown lizards.

Native to B.C. is the northern alligator lizard, which is bigger than the common wall lizard but has shorter legs. They can be found on the North and Central Island and on the Saanich peninsula.

'The time is now': Doctors ask Canadians how to reform primary care

A family doctor and other researchers are asking Canadians to share their experiences with the country's primary health-care system and what they want from it, as a way to help guide future reform.

Ontario education workers such as librarians, custodians and school administration staff have voted 96.5 per cent in favour of a strike.

The big day is here: Quebecers head to the polls

Quebecers are casting their votes Monday after a five-week election campaign.

More than 20,000 Nova Scotians still in the dark 10 days after Fiona, most schools reopen

Ukrainian troops pushed forward Monday with their offensive that has embarrassed Moscow, with Kyiv officials and foreign observers hinting at new gains in the strategic southern region of Kherson that the Kremlin wants to annex.

Sacheen Littlefeather, who declined Oscar on Brando's behalf, dies at 75

Native American actress and activist Sacheen Littlefeather, who declined the best actor award on behalf of Marlon Brando during an Oscars protest in 1973, has died aged 75, the motion picture Academy said on Monday.

The federal government has begun its search for an organization to administer an endowment fund aimed at bolstering the economic and social well-being of Black Canadians.

Hurricane Orlene made landfall on Mexico's Pacific coast near the tourist town of Mazatlan on Monday. Orlene lost some strength after roaring over the Islas Maria, a former prison colony being developed as a tourist draw.